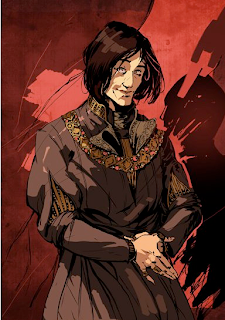 With the discovery of his body in Leicester last year, interest in the often-much maligned King Richard III, the last Plantagenet king of England, is at something of a fever pitch.

The latest temporary exhibition at the Bosworth Heritage Centre in Nuneaton, Richard III: The Making of the Myth, opened to the public on 8th February and offers a stunning manga-styled re-telling of the king's life and death, drawn by John Aggs.

John created the art for the Leicestershire County Council display and the free exhibition is expected to run until the end of December 2013.

Earlier this month, after months of speculation, Leicester University’s researchers revealed to the world that the skeletal remains discovered beneath a car park in the centre of town, at the old Greyfriars site, were “beyond reasonable doubt” those of King Richard III, last of the Plantagenets.


Leicestershire County Council leader Nick Rushton sees the display as another unique twist on the Richard III story.
He said: "The illustrations are very striking and it is an original look at one of the most famous battles in English history as well as attempting to debunk some of the myths surrounding Richard III."
The exhibition compliments the main exhibition at Bosworth Battlefield Heritage Centre, where real finds are on display from the 1485 Battle of Bosworth Field where Richard met his end.
The exhibition will be accompanied by a programme of expert-talks and events over the coming months.  This includes the ever-popular Bosworth Anniversary re-enactment event which this year will be the 528th since the battle and takes place on 17th-18th August.

• The BBC have a gallery of all the images in the exhibition here.