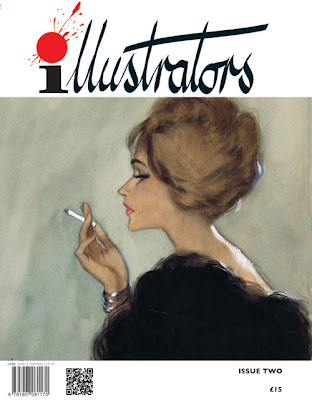 The latest issue of illustrators, the heavily illustrated art quarterly celebrating the finest European illustration of the 20th Century, is now available.

illustrators Issue 2 features two major articles on the artwork of David Wright – Peter Richardson looks at Wright's elegant, painted pin-up art (soon to be seen in Sirens: The Pin-Up Art Of David Wright from Titan Books) while Roger Clark gives his appreciation of Wright’s long running black and white line drawn Daily Mail newspaper strip, Carol Day (reprints of which are now available as an e-book from Amazon UK for Kindle and iPad). 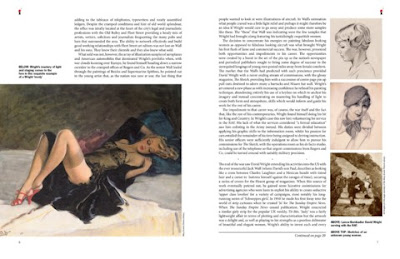 This issue also includes articles on the historical illustrations of Cecil Doughty by David Ashford, the animal art of Raymond Sheppard by Norman Boyd, and the paperback and film poster art of Renato Fratini by David Roach.

There is also an image gallery of the Fleetway Super Library covers of Jordi Penalva while John Watkiss discusses his Walking Dead concept artwork.

illustrators issue 2 costs £15 (or £55 for a 4 issue subscription to the title) and many of the artwork images included in its 96 pages are taken from scans of the original art boards.

illustrators 2 is available direct from the Book Palace Books website.

For a sneak peek of illustrators issue 2 click here.

illustrators editor Peter Richardson was interviewed about the magazine on downthetubes here.

• Several Carol Day adventures are available for Kindle, here's links to a few which will take you to the rest:

David Wright painted a watercolour portrait of my mum in 1945. She was 18!