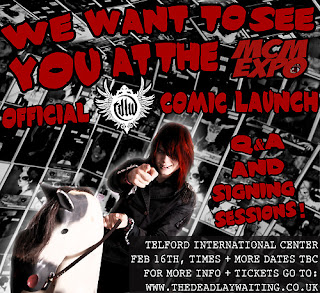 From a metal band's new comic to the galaxy's most bad ass bounty hunter to two of the best new games to come out of Japan, this Saturday's MCM Midlands Comic Con at Telford International Centre comes jam-packed with geeky goodness.

Here are a few other highlights:
• Tickets for MCM Midlands Comic Con on 16th February are available at www.midlandsmcmexpo.com/tickets And remember: KIDS GO FREE! *

* The ‘Kids Go Free’ offer applies to General Entry tickets only. Children aged 10 years or younger gain free entry if accompanied by a full paying adult, to a maximum of two children per full paying adult.
Posted by John Freeman at 7:00 pm