Along with details of the latest print editions of DC Thomson's Commando war comic comes news that the title has pushed further into the digital sphere - with a number of one-off issues released for Amazon's Kindle device.

"Operation Kindle has been a success," editor Calum Laird tells us. "There will be 12 Commando issues in the Kindle store by the time you read this.

"There has been a lot of work involved to get them there," he acknowledges, "but I think the results are worth it. The pop-outs (or guided reading, if you prefer) give a slightly different reading experience when compared to paper or even on our app.

"A spin-off is that Android users will be able to access the stories using a Kindle reader which will tide them over until our digital boys can be persuaded (bludgeoned) to give us a proper Android app!"

The issues released are: Hell’s Cauldron, The Sergeant And The Squad, Sky Ace, The Chef Who Went To War, Operation Horsa, The Brink Of War, Fog Of Doom, Saved From The Sea, Nightmare Hunt, In The Line Of Fire Duel In The Sun and From Out Of The Sea.

For those of you who still like your adventure on paper (and for those with an iPad or iPhone), here's the detail on the latest news stand titles... 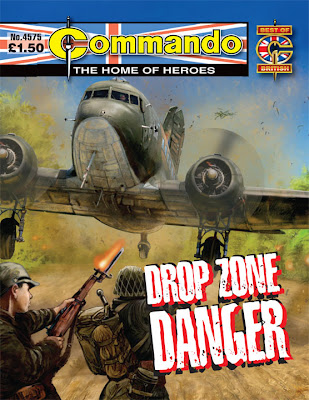 Loading supplies on to C47 Dakotas wasn't the most glamorous job in the Far East. Hard work even for strong men and vitally important but hardly the stuff of death- defying adventures.

So, as Private Seth Yarrow and his mates diligently got on with their back-breaking chores, they never once imagined that they'd end up alongside a unit of Chindits - fighting the Japanese deep in the heart of the Burmese jungle! 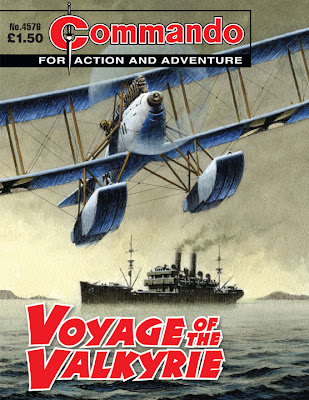 With six-inch guns, torpedo tubes and a Freidrichshafen-33 floatplane to hunt out targets for her, the German commerce raider Valkyrie was feared by British merchant crews in the South Atlantic in the early years of the First World War. So much so that the Royal Navy sent an M-Class destroyer to track her down, and destroy her.

However it was another, much more unexpected, enemy that the Valkyrie's crew had to fear… 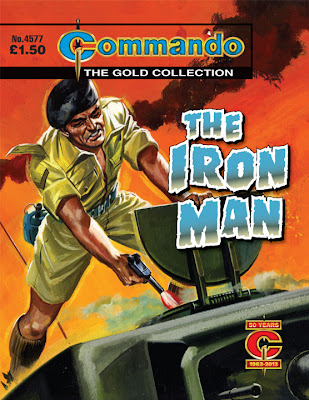 Six words. Just six small words were all it took to turn the tough, loyal team that formed the crew of a fighting desert tank into a bunch of snarling, suspicious enemies.

And those were the words Jack Baker, tank commander, heard from Military Intelligence only minutes before he was due to leave on a dangerous operation - “THERE IS A TRAITOR AMONG YOU…”

“Early Commando stories can be pretty gritty at times,” notes editor Calum Laird of this reprint story. “There's an early scene here which pulls no punches - principally because the Second World War was in the very recent past and many of the comics' creators had 'done their bit.'

"This tale is no exception; there are details in the story which add an air of authenticity difficult to give a story nowadays because knowledge of these minutiae have been lost.

“So grab yourself a slice of the real stuff while you can.” 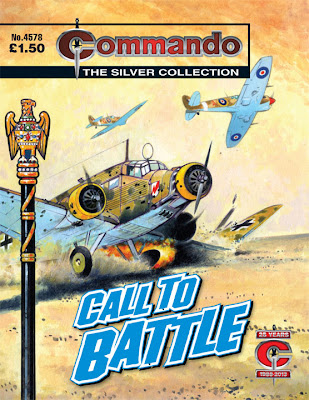 Sergeant Tim Sanderson had heard all about The Fighting Hawk from a dying relative. It was an old and priceless carving on an ebony staff, encrusted with fabulous jewels, used by an Arab tribe to call their brethren to battle. But that was in the distant past and he half-suspected that the whole thing was just a myth with no place in the savage desert clashes of nineteen-forty-two.

Luckily he was better at fighting than seeing into the future…

“The arid wastes of the North African desert have provided Commando writers with seemingly endless story opportunities,” says Deputy Editor Scott Montgomery of this tale. “Over the year, too, we've seen many a tale based on quests to rediscover ancient artefacts imbued with power, whether symbolic or mystical.

“In this case the prized object is a magnificent, jewel-encrusted staff used to by an Arab tribe to rally its warriors in an eponymous 'Call To Battle.' But it is not just for them. The staff is something from an old, never-forgotten tale that also galvanises our everyman Commando hero, Sergeant Tim Sanderson, into action.”

downthetubes is pleased to offer an exclusive discount on a subscription to DC Thomson's Commando comic, entitling readers to save 50% by ordering using our special discount code!

*Saving based on discounted Direct Debit price compared with shop price. First quarterly payment discounted by 50% at £12.50 and £25 per quarter thereafter. UK bank accounts only. One year discounted subscription rate of £99.
Posted by John Freeman at 12:55 pm