Announced at very short notice, the University Of Dundee held an official opening event for their new exhibition of original artwork 75 Years Of The Dandy on Saturday 8 December with the added bonus of getting five of the men working on the new Digital Dandy along to the University's Baxter Suite to talk about the new e-comic version of the venerable title. 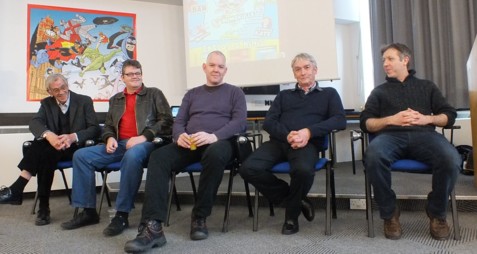 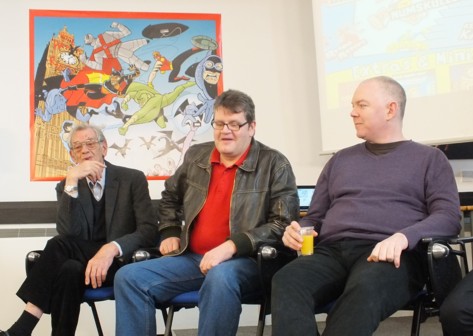 Taking questions from the audience, the group talked about both the old and new versions of the title. David Sutherland is best known for his work on The Beano, including 50 years of illustrating The Bash Street Kids, and while semi-retired he admitted that he had been tempted to help out on the new version of The Dandy by editor Craig's offer of a fish and chip supper at the end of the day. Craig Ferguson had previously worked on both The Dandy and The Beano and both he and writer Dan McGachey spoke fondly of the good-natured rivalry between the staff of the two comics who worked in neighbouring offices. 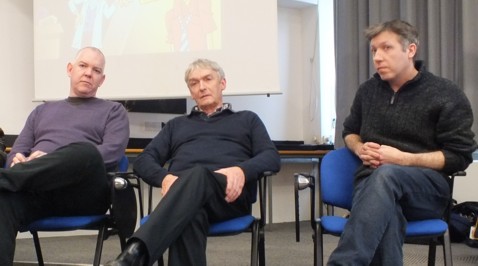 Morris Heggie talked at some length about the two original editors of The Dandy and The Beano, Albert Barnes and George Moonie, as well as the differences between the two publications with The Beano's move to child characters in the 1950s and The Dandy's more aggressive comic violence.

Stephen White, also known as Stref', talked about the differences for an artist working on the older version of The Dandy as he had, compared to the new version of the title with its motion strips and the additional work that illustrating for such a format involves. The talk was good natured, yet informative as a remembrance by one of the group would often set in motion a completely new topic of discussion. 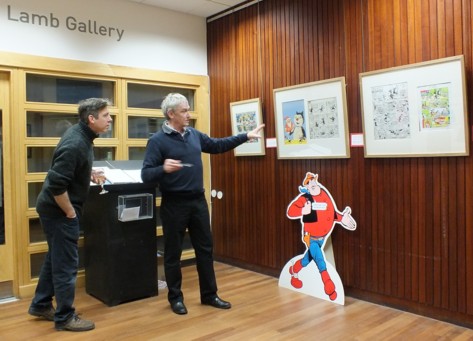 After a break for refreshments, the event moved to the University's Lamb gallery and the large display of original Dandy artwork, comics, annuals and various spin-offs. Morris Heggie gave an exhibition talk as he and the audience moved around the gallery looking at specific artwork. Stephen (above) pays attention to Morris' comments on Korky The Cat artwork by Charlie Grigg, while (below) Morris points out some rare initial sketches by Dudley D Watkins below the main image of his WWII era header for a Wild Young Dirky text story. 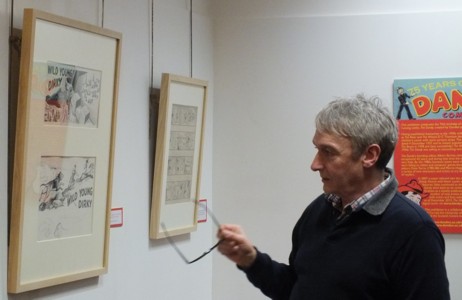 A colour mock up for the front and back covers of The Dandy Book for 1957 drew a lot of attention despite being colourist's art rather than the original artwork... 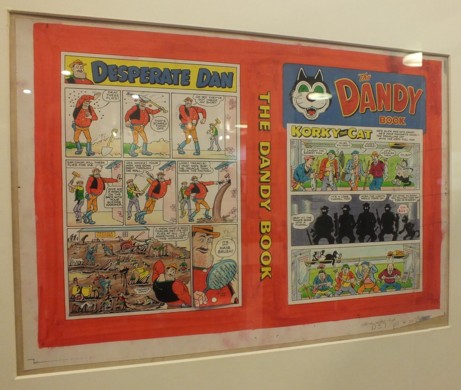 ...however the two pages of Desperate Dan (below) were very much original Dudley D Watkins artwork and showed how his style of drawing the character had changed over the years between 1942 on the left and 1959 on the right. 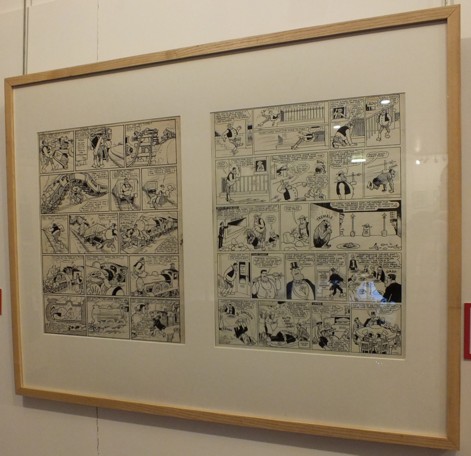 With so much artwork on display in the gallery, it covered the more modern Dandy characters as well as the older ones including this one (below) of Cuddles, of the terrible toddlers Cuddles and Dimples, with a slight problem with the cold courtesy of artist Nigel Parkinson. 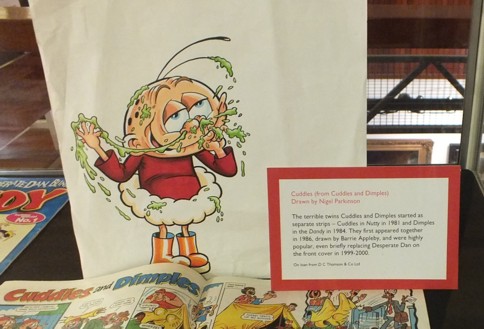 There were a selection of images from the new Digital Dandy around the walls in the Baxter Suite including a large poster image from the superhero strip Retroactive which we already know features the original Dandy superhero The Amazing Mr X. As no DC Thomson character with superhero-like powers will be off-limits to the new strip, whether they featured in the humour titles, the boy's adventure titles or the girl's adventure titles, this close-up image of the poster gives a little taster of just which characters may turn up in future issues. 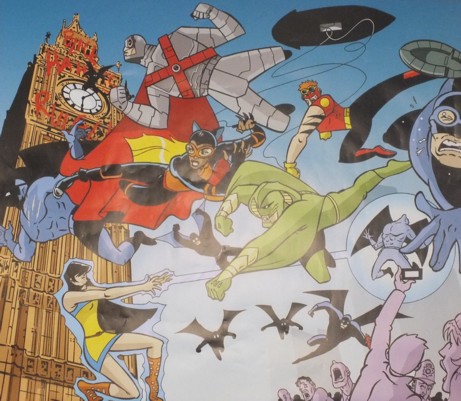 Congratulations to Chris Murray and Phil Vaughan for organising such an interesting event at such short notice and I would hope to see similar events at the University continue in 2013.


The Digital Dandy is available via The Dandy website, www.dandy.com or by clicking on the image below. 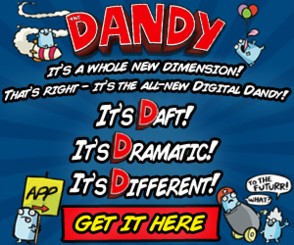 The University of Dundee 75 Years Of The Dandy exhibition is free and runs in the Lamb Gallery of the University's Tower Building until 12 January 2013. There are more details, including seasonal opening times and images of some of the original artwork on display, at the University Of Dundee Museum Services website. 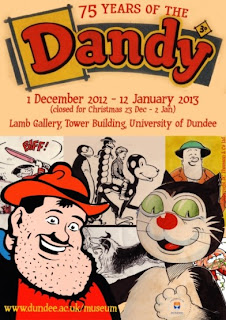 Posted by Jeremy Briggs at 3:45 pm