In Review: XIII - Release The Hounds 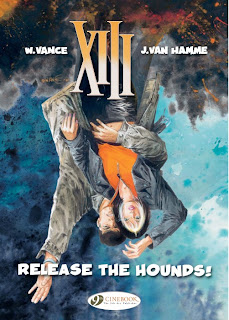 Just when we thought that we were on top of who exactly XIII is, writer Jean Van Hamme and artist William Vance are out to turn more than just the two cover characters on their heads in the latest book in Cinebook's XIII saga, Release The Hounds!

XIII remains on the run from America's National Security Agency, the NSA, and their double agent Jessica Martin who also works for the illegal Executor organisation run by former KGB agent Irina Svetlanova. Jessica and three other NSA agents are prepared at all costs to stop XIII escaping from them while they are all on a sleeper train in California but, inevitably, he does with a reluctant Jessica in tow and after the high speed action in and around the train, they make their escape in, of all things, a hot air balloon. But can XIII trust a double agent who has tried so hard to kill him? 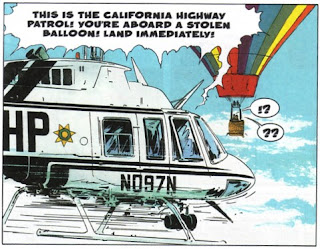 After the James Bond shenanigans in the second half of the previous book, Top Secret, the train fight on a stormy night at the start of this one comes as no surprise, especially since fights in the rain are such a XIII staple. Yet the aerial escape in a hot air balloon proves to be a short lived quiet interlude as XIII continues to make his way back to his friends in San Miguel via Mexico with a multitude of killers after him. 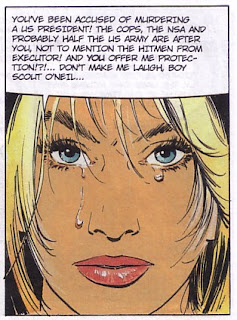 Jean Van Hamme almost pushes a little too far with this one. Partially I think it is to give William Vance a chance to show off his accurate aviation art as a selection of aircraft (Bell 206L Long Ranger, OV-10 Bronco, and a Cessna Skymaster) put in appearances as XIII heads south from the USA towards his friends in the Caribbean in a succession of different modes of transport. Partially it is also because Jessica's apparent change of heart over killing XIII early on seems a little too convenient to the plot and, given that we already know that she is a double agent, why does XIII suddenly trust her quite so much? However by the end we have an explanation and another twist that leaves XIII in yet another awkward position.

As for that awkward position on the cover, with both XIII and Jessica upside down with Jessica's hair seeming unaffected by gravity, you'll understand it when you read the book.

XIII - Release The Hounds! is not the best chapter in the ongoing XIII story but it remains an enjoyably entertaining one and, with Cinebook skipping the retrospective book in the series, The Investigation, that means there are now only four books to go before the conclusion of the saga when, hopefully, all will be explained.

There are more details of the English language XIII books on Cinebook's website.

There are more details of the original French XIII albums on the official XIII website (in French).

You can read an interview with Cinebook publisher Olivier Cadic and XIII translator Jerome Saincantin on downthetubes at XIII Questions About XIII.
Posted by Jeremy Briggs at 2:30 pm