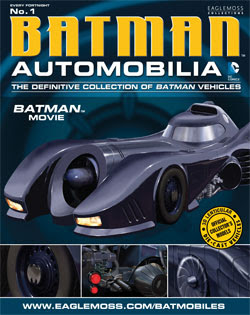 A new fortnightly series, Batman Automobilia Collection, launches in the UK in January from Eaglemoss, which distributors Comag say will offer Batman fans and car model enthusiasts alike the chance to collect the most iconic vehicles ever driven by the DC Comics hero.

Aimed at predominantly at men aged 16 and over the 80 part work series will feature Batmobiles from the hit TV shows, blockbusting films and more than 70 years of comics, from its first appearance in Detective Comics No.27 in May 1939 to The Dark Knight Rises film in 2012.

The Batmobile has gone through numerous incarnations, but has always been an innovative and inspirational vehicle for fans of the Caped Crusader. With weapons, gadgets and special abilities, it is almost a character in its own right in the stories for some, and its appearance is eagerly anticipated whenever a new one is designed.

Every issue will carry a superb quality die-cast model of a Batmobile in a Perspex display box with a lenticular background. In addition to the Batmobile, each issue will carry a 12-page magazine that describes that particular version of the vehicle.

Comag says the magazine will be supported by a staggering £1 million media campaign across TV, e-mail, online marketing and social media - imagine that kind of budget for The Phoenix or 2000AD...

Noooooo more money out of my wallet.