Elephantmen versus Strontium Dog story in the works 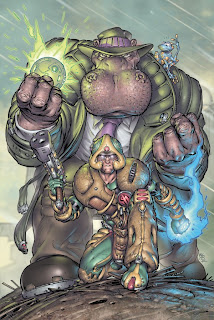 Elephantmen creator Richard Starkings and artist Boo Cook will be signing at Travelling Man in Leeds this Saturday with advance copies of the fifth Elephantmen hardcover, Devilish Functions.

The collection includes 'Man and Elephantman' (including the sold out one shot and the highly sought after issue by Bulletproof Coffin's Shaky Kane) and 'The Killing Season' plus several extras, including art by J. Scott Campbell and the shocking 'strip' from last year's Liberty Annual by Starkings and Shaky Kane.

Fans of Richard's Elephantmen will have the chance to ask the British creator - a longtime resident in the US these days - about the Elephantmen and Strontium Dog story set to feature in Thought Bubble anthology which will be published in November.

Bleeding Cool reports the crossover story has been created with the approval of Strontium Dog creator John Wagner and 2000AD.

Richard will also be signing with artist Doug Braithwaite at Travelling Man in Newcastle the on Saturday 28th July.

• More about Elephantmen on the Hip Flask website: www.hipflask.com/elephantmen/

• More about Devilish Functions here
Posted by John Freeman at 11:32 am