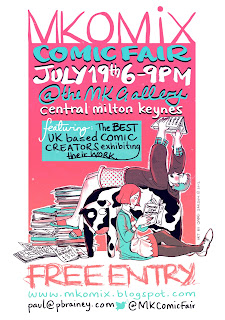 Full details of the event, which reads like a Who's Who of some top British indie comics creators, can be found www.MKomix.blogspot.com and include the following:

•  Avery Hill Publishing is a new small press company run by Ricky Miller who currently have two quarterly titles: Reads, a comics anthology and Tiny Dancing, an arts and humour magazine. They also publish the world’s foremost and indeed only collection of extremely close-up photographs of Masterchef. Plans for lots more of this sort of thing are in the offing.
Reads featureswork from some exciting new UK comics talent and includes time-travelling beagles, ghosts, domestic violence, cloud-riding and London cabbies.
The word 'eclectic' was invented for Tiny Dancing - in the latest issue you can find Tom Selleck and David Bowie expounding on their favourite birds of prey, Roy Orbison wrapped in clingfilm and brilliant art from the likes of Soju Tanaka and Lawrence Williams.

•  Sean Azzopardi is a cartoonist and publisher. He has produced numerous mini comics and books for his Phatcomics imprint, acclaimed titles such as Ed and Twelve Hour Shift. Away from self published works he has worked on Necessary Monsters and a back up strip for indy smash Phonogram. Sean has also contributed to a variety of anthologies and has illustrated for magazines, most recent examples can be seen in the current Electric Sheep anthology and Paper Science.

•  William Axtell produces a comic called Demon Gate and the first three issues of which will be available at the event. To see more of his work, please visit his Facebook Art Page here.

•  David Baillie writes and draws comics. His creations appear in places like 2000AD, Judge Dredd Megazine, Teenage Mutant Ninja Turtles and Self-Assembly Furniture Monthly. He also works in television a bit - mostly drawing storyboards and some writing. He's been nominated and shortlisted for prizes and awards but doesn't like to talk about that. (Mainly due to not winning any of them).
He's also been a stand-up comedian for about six months but he will not tell you any jokes.
If you buy anything from him at MKomix he'll draw you something on some paper that will probably be worth millions of pounds if he ever gets famous and then dies. And if that's not a bargain, I don't know what is.

•  Emily Brady is a mixed media artist, cartoonist, illustrator and art tutor living in a world of her own imagining. She lives on cake and curry and spends her days drawing away and humming a merry tune.

•  Richy K. Chandler is a London based comic creator and illustrator. His most recent venture is the weekly webcomic about an unpopular teenage girl who happens to be an octopus, Lucy the Octopus . Last year he launched Rosieand Jacinda, a teenage romantic comedy with a hint of fairytale, created with Zarina Liew.
Other work includes Delicate Axiom and the Tempo Lush Mini-Comics range. He’s contributed to Accent UK’s Robot anthology, Factor Fiction’s Girly Comic and currently writes for Titan / Aardman’s Wallace & Gromit newspaper comic strip.
Richy will be selling copies of Lucy the Octopus, Bear Shaped Mini-Comics Box Set, Cosmically Enlightened Gift Set and the teenage romantic comedy with a hint of fairytale, Rosie and Jacinda.

•  Andrew Cheverton is the writer of the long-running West series, illustrated by Tim Keable and approaching the finale of its second volume. West is the tale of both Jerusalem West and the land which spawned him, and is told in a deliberately non-chronological order. His newest project is The Whale House, illustrated by Chris Doherty, which follows Diggory Wallis, recently bereaved and orphaned, on his journey of discovery in the mysterious country house of the title. Andrew also wrote and illustrated the one-off comic Pictures Made of Light, and is a regular artist on Rol Hirst's PJANG and Too Much Sex & Violence.

•  Peet Clack consistently produces some of the funniest and most beautifully drawn comics available. He is responsible for such masterpieces as Crazy Pants, Trouser Madness and Handy (and Hoofy) Home Hints With Afro-Horse.


•  Steve Collier is one of the team behind Japan Comic Aid, which aims to regularly publish comics, manga and graphic novels around the world to raise money for those in Japan who are in need of rebuilding their life by teaming up, reducing costs and using ALL profits for the Japan Society Tohuku Earthquake Appeal fund.

•  Laura Watton-Davies (aka Pinkapplejam) has been making her own comics since the mid 90s and is influenced by cartoons, zombies, Japanese fashion plus everything cute. She will be bringing art prints and one-shots to MKomix.

•  Decadence Comics is an independent comics collective formed by Lando and Stathis Tsemberlidis in 2003. Since their inception they have self published eight issues of the distinctive Decadence anthology, as well as a clutch striking single issue comics.
The Decadence aesthetic is a heady blend of science fiction, Ballardian near future musings and psychedelic altered states. Their work recalls the best of early European sci-fi comics, whilst maintaining a strong identity of their own. Decadence, by virtue of their approach, influences and interests, are a highly unique entity on the UK underground comics circuit. Their comics map the outer reaches of sci-fi, tracing out the contours of some strange cosmic zone that only a handful of intrepid travelers have dared stray into.

•  Jay Eales and Selina Lock are the publishers of the fabulous Violent! and Girly Comic titles, as well as being heaving involved in the wonderful Caption conference for independent British comic creators.

•  Rol Hirst has been writing small press comics for 20 years. He was a prominent member of the early 90s scene with his long-running comic The Jock (in collaboration with a number of artists, mostly the amazing Nigel Lowrey). Other books he released back then included Slick 'n' His Conscience (with Adrian Bamforth), My Legendary Girlfriend and Escape Committee (both with Dave Metcalfe). He returned to the scene in the 21st Century with his anthology book PJANG (People Just Ain't No Good), working with a number of his former collaborators, plus other giants of the small press world, including Andrew Cheverton, Kelvin Green, Tony McGee, Chris Askham, Ryan Taylor and Paul Rainey.
He's currently producing Too Much Sex & Violence, a new ongoing comic set in the bizarre, corrupt, depraved and freak-infested northern seaside town of Fathomsby. It's drawn by everybody above, plus some other talented fools Rol has been able to blackmail.

•  John Maybury - comic artist and occasional editor, John is the creator of the brilliant adults-only Space Babe 113, an absurdist, surreal, adult SF comedy. He came up with this in an attempt to explore sexy, abstract characters as a story telling vehicle - and make naughty jokes.
Space Babe 113 features artificially intelligent talking knickers, aliens and big hair. The artwork is stylish and minimalist and her latest comic, Costumes, Comics and Conventions will début at MKomix.

•  Rob Jackson has been creating some of the best self-published comics of the last few years including Gin Palace, Goblin Hall and Flying Leaf Creature. Rob will be selling a selection of his work including his recent It's A Man's Life In The Ice Cream Business, the compelling story of his ice cream business.

•  Ralph Kidson - one of the funniest creators in comics, creator of Captain Dolphin, Sad Animal and Hootiebits.

•  Dan Lester is the creator of titles such as Monkeys Might Puke! and The Dan Lester Mysteries  in which small press creator Dan becomes embroiled in murder and mayhem! Features art by Oliver Lambden.

•  Amy Letts is the creator of the long-running and very popular web comic Epic Fail, inspired by Dungeons and Dragons.

•  Ash Pure descreibes himself as "a powerful magician, a traveller between realities (an Altered Statesman) and a creator of worlds." He also makes a very good cup of tea (not too strong, not too weak – just right) and is a founding member of JWH Creative partners, providing the pretty pictures.

•  Paul Rainey, organiser of the Fair is a Milton Keynes based cartoonist responsible for Memory Man, Love Bomb, internet diary strip Book of Lists, the 318 paged There's No Time Like The Present (soon to be collected as a graphic novel by Escape Books) and Thunder Brother: Soap Division (currently appearing every Sunday here).He'll be selling the Book of Lists collection and premièring the very first issue of his latest project, Thunder Brother: Soap Division.

•  Suzanna Raymond - Milton Keynes based creator: a fine artist who will be displaying her work as well as the comics of some of her friends.

•  Karen Rubins was the Comics Artist in Residence at the V&A between July and December 2009 and is an award-winning creator of comics and manga. Her small-press work includes the surreal road-trip series DARK, shamanic comedy adventure Urban Beasts, and medieval witchcraft drama Blood Magic. She writes, draws, reads, collects, buys, recommends and teaches comics. You can follow her on twitter @kazmantra and visit her website here.
Karen will be exhibiting and selling Blood Magic Limited Edition Prints with free comic, or Sticker Packs with a free comic, Urban Beasts parts 1 and 2 and Leek and Sushi UK Manga Anthology.
She will also be doing personalised sketches - Urban Beasts Portraits (with you depicted as your inner animal self) or anything else you want drawn to order!

•  Jade Sarson is one of the event's local creators who will be exhibiting and selling her comics at the event. Jade kindly designed the excellent leaflet for the event and you can see lots of samples of her striking work at her website here.

• Aisza Sowa - Milton Keynes based comic creator who will be exhibiting both his own work, including Insanity Warriors 1 and Meaw, and the work of other members of the MK Manga Club.

•  Rob Wells has been writing and drawing comics since the early 1990s. He is the creator of the comics Crisp Biscuit, Crisp, The Devil's Daughter, Colin Comix, and Crisp Biscuit Comics. He drew the Bear Man & Twinkle mini-comic that came with #6 of Martin Eden's Spandex, contributed art to the first three issues of Rol Hirst's Too Much Sex & Violence (and will also be drawing a couple of pages for #5), and is currently drawing a comic called Department of the Peculiar, also written by Hirst, the first issue of which should be out very soon. He has also drawn a six page strip called Body Pop, written by Paul Rainey, which should be appearing in the next issue of Strip Magazine. His work can be found online at www.crispbiscuit.co.uk and www.crispbiscuit.blogspot. com.

"I'm very pleased with the range of comic creators appearing, a full list of which can be found in this particular post
I would be very grateful if you could remind your readers of the MKomix Comic Fair and that it is free to enter sometime this week. It is an opportunity for people to experience a broad range of modern British comics as well as the extraordinary Pushwangner exhibition.
Posted by John Freeman at 11:10 am