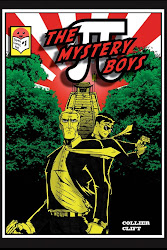 Regular readers may recall we mentioned the opening of the shop last year. You may have already seen Aylesbury Dead, Little Terrors and Apes 'n' Capes, plus the Japan Comic Aid books already, but the shop never had a launch as such.

With that in mind they are celebrating today with creator signings, a raffle, tombola, costume parade thousands of comics to give away, thousands of comics all at £1 each, Yu-gi-oh, Magic the Gathering and Pokemon trading card game demos, Roleplaying and board games too -plus preview of the upcoming kids comics and adult anthology titles.

The store has a back stock of over 50,000 comics, mainly US, but with a sprinkle of UK comics from the 70's and 80's including annuals. As with othe comic shops, new import comics arrive every week.