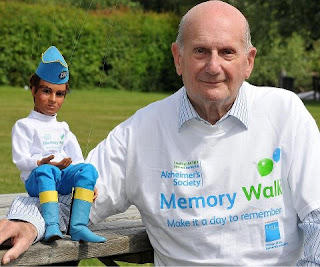 On 28 June 2012 television and film producer, writer and director Gerry Anderson went public with his diagnosis of Alzheimer's Disease to promote the launch of the Alzheimer's Society charity sponsored Memory Walks.

He will always be associated with the Thunderbirds television series but Gerry's career began with young children's puppet shows in the 1950s and continued through the Supermarionation shows of the 1960s to the live action shows of the 1970s before he took to mixture of puppets, stop motion, anamatronics and live action in the 1980s and 1990s and then into the new century with CGI.

Gerry's shows have long been a regular part of British comics and their associated summer specials and annuals, with the crowning glory of course being the TV Century 21 weekly from the mid 1960s although comic strips based on his series have also appeared in TV Land, TV Comic, Lady Penelope, Candy, Solo, Countdown, TV Action and Look-In, newspapers such as the Daily Mail and Sunday Times as well as self titled comics for Stingray, Thunderbirds, Joe 90, Captain Scarlet And the Mysterons, Space Precinct and New Captain Scarlet. These titles have included work from such well-known and respected British comic artists as Brian Lewis, Ron Embleton, Mike Noble, Frank Bellamy, Ron Turner, John Cooper, John M Burns, Graham Bleathman, Mick Austin and Colin MacNeil.

The Alzheimer's Society covers England, Wales and Northern Ireland and during September and October 2012 they will be organising sponsored Memory Walks around the country to raise money for the charity. Gerry will be taking part in the Memory Walk at Windsor on 13 October 2012 where he will be walking with his son Jamie. Jamie Anderson has opened a Just Giving page at which fans of his father's work can sponsor the pair to take part in the walk as well as leaving them a message of support.

Jeremy Hughes, Chief Executive of the Alzheimer's Society, said: "We're so grateful to Gerry for supporting Memory Walk. By speaking out about his dementia he's spreading the message much further that it can happen to anyone. Memory Walk is Alzheimer's Society's flagship fundraising event which sees walks taking place around the UK throughout September. Please join Gerry by signing up for Memory Walk and help us fight dementia together."

There are more details of each of the Alzheimer's Society Memory Walks on the society website.

Long-time Thunderbirds fan Glo Thorogood was part of Gerry's Alzheimer's Society photo call along with her marionette of Thunderbird 2 pilot Virgil Tracy (seen above with Gerry). Glo will be walking the Virgil puppet as part of the same Memory Walk at Windsor and also has a Just Giving page for sponsorship for the Alzheimer's Society.
Posted by Jeremy Briggs at 7:00 am