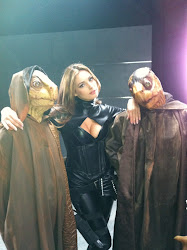 When Panini UK lost the rights to originate Marvel Comics stories, many British comic creators and fans mourned the passing of an era, stretching back to the 1960s when British companies put their own spin on some major comic legends and characters.

Many wondered if Panini would continue originating comics in the UK - outside of its junior titles and Doctor Who Magazine - but now an intriguing possibility presents itself with the recently-announced launch of the Panini Media unit, which operates as part of The Licensing Machine and is focused on the TV distribution arena.

World Screen reports that Panini Media has a catalogue that spans sci-fi, crime, fantasy and drama, as well as animated series, history formats and documentaries. One of its lead titles, to be presented at the MIPTV trade fair, is Metal Hurlant Chronicles, a fantasy series adapting stories from the comic of the same name that has already been sold in more than 50 countries.

The show stars Scott Adkins, Rutger Hauer, Michael Jai White, James Marsters, Michelle Ryan and Kelly Brooke, and with a line-up like that you have to wonder if Panini UK might not be eyeing this up as a possible comic title, which perhaps could include an element of new stories from British creators as well as reprinting Metal Hurlant tales.

Let me stress right now that this is pure speculation on our part here at downthetubes and we are not privy to Panini's new title list! Some Metal Hurlant stories have, of course, started appearing in STRIP Magazine.

Another Panini show is Signs, a drama written by Ysé Brisson. Julien Mutter, Randy Bradshaw, Patricia Harris Seely. Jordskott is a mystery crime series set in present time, though its starting point is the stories and characters from Scandinavian legends.

“Panini Media aims to become a globally recognized provider of quality family entertainment and is very proud to be revealing our extremely exciting portfolio of titles at MIPTV 2012 under our new Panini Media banner," said Bruno Zarka, the head of Panini Media's sales and acquisitions.

Surely extending some of those brands into print for this major European publisher has to be on the cards...