Drokk Me! It's only some Mega-City music 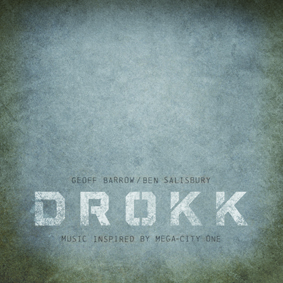 Musicians Geoff Barrow and Ben Salisbury are to release Drokk in May - an album inspired by Judge Dredd's 2000AD home town, Mega-City One.

Geoff Barrow is a founding member of Portishead and producer/label owner of Invada Records UK.  Ben Salisbury is a soundtrack composer with over 200 film and TV credits to his name, including David Attenborough’s Life of Mammals, Life in the Undergrowth and Life in Cold Blood.

Set up by Geoff and Paul Horlick aka Fat Paul "to lose money friends", Invada Records strives to showcase the finest in experimental music, from kraut rock to hip-hop, taking in doom, post-rock, metal and noise along the way. Don't expect genre-specific releases, they're out to promote underground gems you'll struggle to find elsewhere.

Barrow and Salisbury met over 10 years ago when they both joined a Bristol football team for old men. After many disastrous games they decided they might be more productive working on a music project together.

Other work commitments kept them apart until late 2010, when the pair met up with a screenwriter to discuss some possible work on a feature film project.  Although their involvement with this particular film did not continue, a collaborative writing relationship had begun…

When Barrow and Salisbury revisited and started expanding upon this early material they decided to continue writing what was essentially soundtrack music.  Barrow, along with album designer and long term friend, Marc Bessant, were both avid 2000AD readers from a young age, and the sprawling metropolis and classic stories of Mega-City One seemed the ideal inspiration for this ‘soundtrack’.

Although Mega-City One has been brought to life in great detail over many years by the acclaimed work of writers and artists alike, the creators of Drokk feel there is still huge scope for readers to have their own vision/soundtrack of the city. Rather than intending to be the definitive sound of Mega-City One (could there be a ‘definitive sound’ of a city so vast, changeable and varied?), Drokk is Barrow and Salisbury’s personal, outsider’s’ interpretation.

Drokk was written in a six month period between Barrow’s Portishead world tour and Salisbury’s composing jobs for the BBC.  Although it is a soundtrack of sorts, Barrow and Salisbury instinctively felt that music for MC1 should steer clear of the rich orchestration common to many contemporary film scores.

Even for electronica, the music is often purposefully stark and spare, with the majority of tracks created exclusively on the Oberhiem 2 Voice Synthesizer (a 1975 classic keyboard), and its onboard sequencer used to create rhythm and drums sounds. The only exceptions are a handful of tracks which combine the synth with digitally manipulated and time - stretched performances of acoustic instruments (such as piano, violin, mandolin, ukulele, voice and hammered dulcimer).

There is also a brief cameo from Barrow’s other band, BEAK.

We're told Tharg is delighted by the new album.

"2000AD is delighted that Judge Dredd continues to inspire artists in the year of the character’s 35th anniversary, especially such high profile talents as Geoff and Ben," said one of his droids. " You can tell, from their vision of the Big Meg, that they’re massive fans of the strip."