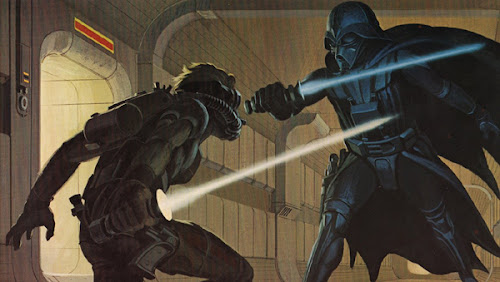 We're sorry to report the passing of SF visionary Ralph McQuarrie, aged 82.
Along with artists such as Chris Foss, Roger Dean, Frank Bellamy and Mike Noble, Ralph McQuarrie's singular vision was another influence in my love of SF art that continues to this day. His design work on the original Star Wars universe and the orignal Battlestar Galactica TV series will be most remembered by many, but he also brought his singular vision to other creations, even if some were not used - a remake of Forbidden Planet, for example.

His contribution to SF art is and always will be, immense. His influence on many young artists, inspiring them to follow in his footsteps, is incalculable.
A tribute posted on his official web site reads:

"It is with the deepest sadness that we announce the passing of Ralph McQuarrie.

"People say you should never meet your heroes. Ralph was the exception to that rule. We were all fans of his amazing art long before we were blessed with his friendship. But once you got to know Ralph it was impossible not to become a fan of Ralph the man.

"Ralph was a very special person for many more reasons than his undeniable brilliance with a brush. He was an especially kind, sensitive, deep, modest, funny and fascinating gentleman. And as fine a role model as any one could have wished for.

"His influence on design will be felt forever. There's no doubt in our hearts that centuries from now amazing spaceships will soar, future cities will rise and someone, somewhere will say...

He will be much missed and our thoughts go out to family, friends and all those whose work he influenced on this sad day.