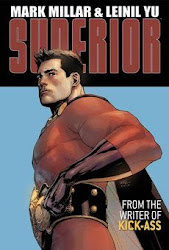 The Book: Simon Pooni had it all going for him - plenty of friends at school, good looks, and his coach called him one of the most talented basketball players he's ever seen. But that was when he could still move his legs. Now he's living with multiple sclerosis — until Superior entered his life! But is the result f one magic wish all it seems?

The Review: Everyone knows the kind of comics Mark Millar writes, yes? Those ultra-violent, gore-filled comic books that horrify and hypnotise at the same time, like Nemesis and Kick-Ass. Angst and anger-filled nastiness writ large for alleged disaffected youth. Comics that would horrify the writers of the moribund Comic Code.

Trust me. Superior is not one of those books, which popular though they are, I can't say I enjoy reading (sorry, Mark).

Superior is, instead, pure unadulterated fun, with heart to boot, and one of my favourite comic collection reads so far this year. 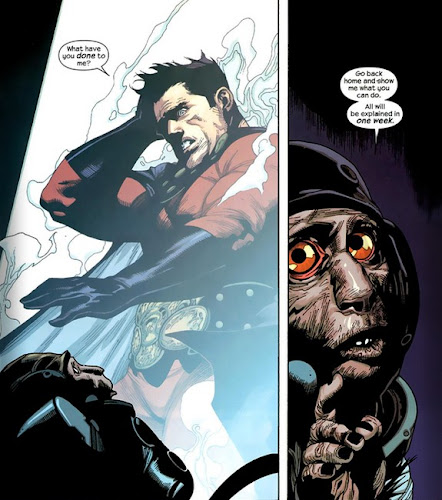 Oh, of course it pulls in ideas and concepts from the movie Big to Superman to Marvelman, as young multiple-sclerosis sufferer and superhero fan Simon Pooni is turned into his idol, Superior, by Ormon, a mysterious talking monkey. But as the tale develops, Millar turns that well-trodden background into a singular tale, as Superior's story becomes real and Simon is forced to make a choice beteween saving the world or losing his immortal soul.

Throughout, Leinil Yu's art on this book - published under Marvel's Icon imprint in the US and CLiNT in the UK - is distinctive, although I do feel the superhero scenes work better than some of those with Simon as himself. There's a depth and detail to Yu's work that does not fail to impress.

As for the story - lightweight it might be, and perhaps a little padded (do we really need so many pages where Simon discovers what Superior's powers are and wherher he has all those of the fictional character he adores?) but above all else, as I said above, it's tremendous fun. And that, from reading Mark's interviews about the story before it launched back in 2010, was entirely the point of the tale. 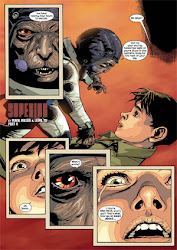 So yes, you do genuinely feel for Simon when, after one week of playing the role of Superior, he learns that Ormon is actually a demon incarnate, and he must sell his soul to the devil in order to remain the superhero - and put back in his old, disease-wracked body while he makes his choice. You know he feels he really has no choice but to accept Ormon's deal when the demon also makes one of his school mates - this one a two-dimensional, no holds-barred bully - Superior's arch nemesis, Abraxas, who proceeds to set out to destroy New York. And yes, jaded by superheroes though I probably am, I did hear myself mentally cheer as Superior and his friends find a way to cheat a terrible fate and end the tale on a happy note (surely a rarity by Mark Millar standards).

While there are a couple of nearly gruesome scenes, there's nothing in Superior on a par with the (for me) unpleasant visceral nastiness you'll find in Nemesis or Kick-Ass. It's all the better for that.

Superior is a joyous romp, perhaps a trifle padded, but with some great characters and characterisation, a charming story - and I thoroughly enjoyed reading it.

Just one question. Who will play President Obama in Matthew Vaughn's movie version?


Art copyright Millarworld/Leinil Yu. downthetubes was provided with a copy of Superior by Titan Books for review purposes.
Posted by John Freeman at 8:44 am