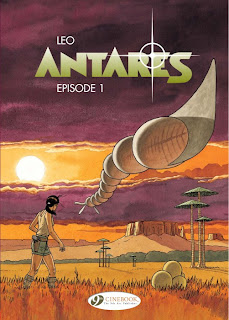 Leo paints a picture of Earth in 2196 not that far removed from ours but where atmospheric pollution requires gasmasks for walking outside, there have been religious wars and the great apes are all but extinct. Against this background Kim Keller has become a reluctant celebrity after saving the Betelgeuse expedition, however her friends Alexa and Mark have been imprisoned for stealing the spaceship that they took to Betelgeuse to rescue her. To free them Kim agrees to be part of a reconnaissance team to the planet Antares for Forward Enterprises, the corporation who have been financing the potential colonisation of Antares, and who can have Alexa and Mark freed to help her. 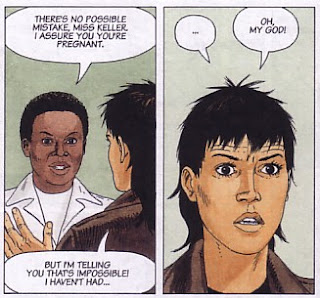 During the health check for the job, Kim is told that she is pregnant and, realising to her horror who the father is, she returns to Betelgeuse to give birth. Released from imprisonment, Alexa and Mark go to Betelgeuse to find Kim to convince her to begin the Antares expedition, unaware of the strange disappearances have been happening on the new planet.

The highlight of all these books is Leo's art which here is as impressive as ever with yet another batch of very alien creatures for the potential colonists to deal with while his image sequences of the mysterious disappearances that occur on Antares are shockingly beautiful. The cover, with its semi-transparent floating worm creature, sets the scene beautifully and yet it is Kim's pregnancy and, later in the book, her child that are the focus of Episode 1. Leo throws both his characters and the readers a most unexpected curve ball as we are introduced to Kim's daughter Lynn for the first time. 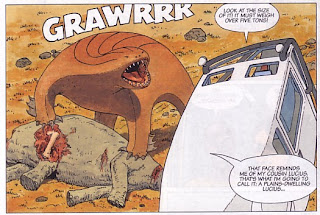 Individually Leo's Aldebaran sagas can be slow with apparently irrelevant passages, but they build into something that is greater than the sum of their parts as he weaves a tale of truly alien worlds and the flora and fauna that inhabit them. Indeed Kim, as the main character in the books, has not even begun her space voyage to the planet Antares let alone stepped onto the planet by the end of this book. That said I would expect this sequence to run to the usual five albums and the fourth Antares book, unsurprisingly entitled Episode 4, has just been released in France.

Antares Episode 1 lives up to the promise of its World of Aldebaran predecessors with the fascinatingly alien fauna and a long form plot that demands you buy the rest of the series.

• There are more details of Antares (and Aldebaran and Betelgeuse) on the Cinebook website. Antares Episode 2 is due to be released in May 2012.

• There are more details of all Leo's books on The Worlds Of Aldebaran website (in French).

• The downthetubes review of Aldebaran is here and the review of Betelgeuse is here.