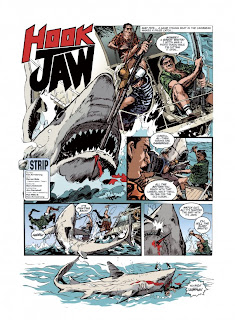 It's a funny old world.

This week, Print Media Productions launched their new comic magazine Strip, featuring reprints of the classic 1970s comic story Hookjaw, which features a shark with a hook stuck in its jaw as the main character.

Today The Sun, amongst others, reports that Chris Handley, an angler in Florida, beat odds of billions to one catching a shark by hooking a hook already stuck in its mouth!

The good news? The shark was released and is back in the water.

As Harry Hill might say, 'What are the chances of that happening, eh?'

Check out the full story here.
Posted by Ian Wheeler at 12:00 pm