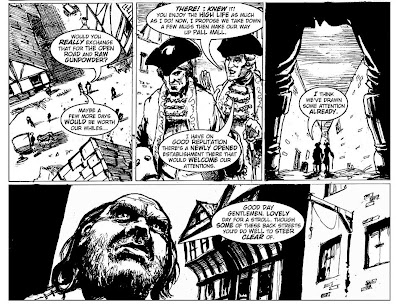 Time Bomb Comics has announced that their next release, Dick Turpin and the Crimson Plague, will be launched at the Leeds Thoughtbubble weekend of the 19th & 20th November, where the creative team will be conducting a mid-day signing session at the Time Bomb Comics table on the Saturday afternoon.

One week later, Steve Tanner and Time Bomb Comics will be at the Malta Comic-Con taking place in Valletta, Malta over the weekend of 26th & 27th November to launch the book internationally.

Once again written by Steve Tanner, this second horrors and highwaymen mash-up from the Birmingham based company features artwork from rising star Graeme Howard – who is currently drawing Cy Dethan’s Cancertown 2 for Markosia – and lettering by the talented Nikki Foxrobot.

It has also been confirmed that Dick Turpin and the Crimson Plague will be available to order in the December 2011 Diamond Previews Catalogue.

• For more information on this and any other Time Bomb Comics visit: www.timebombcomics.com
Posted by John Freeman at 11:54 am