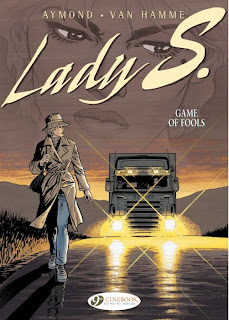 Suzan Fitzroy, writer Jean Van Hamme and artist Philippe Aymond's reluctant spy who is codenamed Lady S, returns in Game Of Fools, the third of her books from Cinebook, originally published in the French weekly comic Spirou before being complied into the album Jeu De Dupes in 2007.

Suzan and her adoptive father James Fitzroy, who is an American ambassador without portfolio, are on holiday at his villa in France. Unknown to them the CIA have discovered that Suzan is linked to the mysterious European counter-terrorist organisation that, despite sharing the same objectives, the CIA has little information on and is therefore suspicious of. In an attempt to learn more about this organisation, the CIA stage her father's abduction by 'Islamic terrorists' in an attempt to force Suzan's handlers into the open. 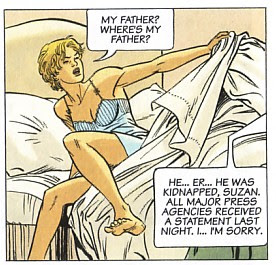 Believing her father kidnapped, Suzan's handler Orion, who has been injured by the CIA, puts her on the run to apparent safety at a retirement home in a remote mountain pass. With the CIA's operatives hot on her trail, Suzan soon discovers that there is more to this retirement home than meets the eye while the French police begin to suspect that the on-the-run daughter of the kidnapped American ambassador is somehow involved with a notorious cat-burglar.

In Game Of Fools Suzan/Shania/Lady S is presented with a situation that has the potential to expose not just her spy life but also her criminal past as she attempts to find the retirement home where Orion told her to find a new contact known as Betelgeuse. Otherwise the book as a relatively linear plot of a girl on the run being passed from handler to handler until she reaches her destination followed by the big reveal of what that destination is hiding. 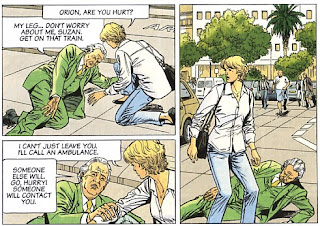 Whether this revelation is actually good for the series is debatable although there are another three French albums waiting to be translated. One of the strengths of the previous Lady S books was the fact that writer Jean Van Hamme left Orion's organisation mysterious and that Suzan did not really work for them as much as being blackmailed into doing things by them. Indeed the organisation is not even named in the previous books yet in this one its name appears in the very first panel of the book. So in Game Of Fools everything is revealed and Suzan asked to formally work for the uninspiringly acronymed CATRIG (Centre For Anti-Terrorism Research and Intelligence Gathering) which somehow sounds so much more interesting in the original French book as CIRCAT (Centralised Information And Research Centre Against Terrorism).

Philippe Aymond's artwork remains as grounded in reality as in the previous books. His clear artwork, as ever, portrays Suzan as a pretty young woman living in a real world of trains, truckers and motorcyclists rather than portraying her with a distorted body image and capable of physical feats that would put any real person in hospital.

Game Of Fools is not the strongest of the Lady S books translated to date but it does open up the series so that the reader has a better idea of the background to Orion and the organisation that he, and by default Suzan, works for. Whether this is a good thing for the plotlines of future books remains to be seen.

• There are more details of the Lady S books on the Cinebook website.

• There are more details of the French Lady S books on the Dupuis website (in English).

• There are more Lady S images, as well as preparatory sketches for the books, on Philippe Aymond's blog at http://philippeaymond.blogspot.com
Posted by Jeremy Briggs at 7:00 am