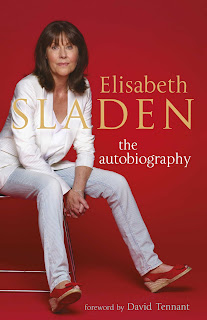 Aurum Press will release Doctor Who actress Elisabeth Sladen's autobiography this week - an occasion tempered with sadness, given her untimely death back in April - but a release that prompted my own memories of 'working' with the accomplished actress back when I was editing Doctor Who Magazine.

When Lis first appeared as journalist Sarah Jane Smith in the 1973 Doctor Who story The Time Warrior, little did she know the character would become one of the most enduring and fondly remembered of the series' long history.

The years that followed saw Lis traverse time and space alongside classic Doctors Jon Pertwee and Tom Baker, whilst a generation of children crouched behind the sofa, terrified but transfixed as their tea-time heroine found herself menaced by Daleks, dinosaurs, Cybermen, Egyptian mummies, actors in green Bubble Wrap and even the Loch Ness Monster.

By the time she quit the TARDIS in 1976, making front-page news, Lis had become one of the most familiar faces of a TV golden age.

But you don't just walk away from Doctor Who. Fandom made Sarah Jane Smith their own, while Lis Sladen took on another adventure - bringing up her daughter. But even then, she was asked to reprise her role many times, appearing in anniversary specials, the ill-fated 1981 spin-off with robotic sidekick K-9, radio plays, for the BBC's Children in Need and, in the first Doctor Who comic strip I edited for Doctor Who Magazine, Train Flight.

Written by Andrew Donkin and Graham S. Brand, drawn by John Ridgway, I recall I wanted to make a statement with my first edited strip and like editors before me, put my own 'stamp' on what I wanted to see in the magazine's comic section. That included, on occasion, utilising more elements of the TV show than just the Seventh Doctor, such as featuring some TV monsters and, eventually having Ace (played on TV by Sophie Aldred) join the Time Lord in the TARDIS.

I'd already been in contact with Lis Sladen before her comic appearance: as part of its obligations to the BBC and actors union Equity, in my time as editor DWM had a requirement to pay 'appearance fees' to actors for the use of BBC photographs not connected with recently-transmitted episodes. While these fees were quite low, the paperwork required to secure permissions from actors and their agents (and the owners of rights on some of the monsters such as the Daleks, Cybermen and Yeti) was quite time consuming (but needed to get new photos from the BBC Photographs department featuring those actors) and hadn't been carried out for some time before I took on the Magazine.

As a result there was a small backlog of monies owed to some actors, which I got resolved with the support of the rest of Marvel UK's magazine department (even though I think they thought I was mad to take on such a task).

Despite the cost, the bonus of sorting out this paper work was a much improved relationship with some of the show's key actors and rights holders. It meant that when I asked Lis if she would give permission to feature her likeness, as Sarah, in the strip, she happily agreed for the princely sum of £40 per issue.

It was also, I believe, the beginning of her stepping back into attending more fan events: I recall the first of these was one in Birmingham, which I went to along with then Who producer, the late John Nathan-Turner. 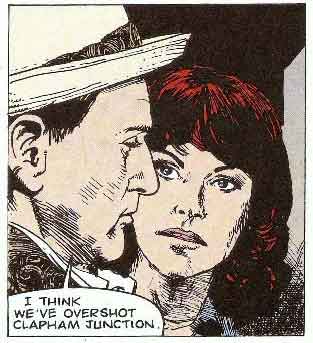 I don't recall if Lis liked her comic appearance but she gave permission for a further use (in a K-9 & Company inspired strip drawn by Vincent Danks), so it can't have been too badly received.  John Ridgway did a cracking job on the art, I felt, which I'm sure didn't hurt.

During my time as editor (and even after I had moved on from DWM) Lis occasionally phoned me up and asked me advice on some matters relating to fan invitations and other opportunities relating to her role as Sarah Jane Smith. She was always a pleasure to deal with.

Down the years, she toured the weird, wide and wonderful world of Doctor Who fandom and of course, as we know, became one of the series' all-time favourite companions. So when TV wunderkind Russell T Davies approached her to come back again, this time to a show backed by multi-million-pound budgets and garlanded with critical plaudits, how could she refuse?

This warm and witty autobiography, completed only months before Elisabeth died, tells her remarkable story, from humble beginnings in post-war Liverpool, through an acclaimed theatrical career working alongside stage luminaries such as Alan Ayckbourn, to Coronation Street, Some Mothers Do 'Ave 'Em and the furthest reaches of the Universe.

A unique insider's view of the world's longest-running science fiction series, and of British television yesterday and today, Elisabeth's memoir is funny, ridiculous, insightful and entertaining and a fitting tribute to a woman who will be sadly missed by millions - myself included.

• Elisabeth Sladen: the autobiography is published by Aurum Press on 7th November 2011 at £18.99

• Inside Doctor Who Magazine: an article about a day in the DWM office while I was editor by David Bishop
Posted by John Freeman at 11:42 am