In Review: Aldebaran - The Catastrophe, The Group and The Creature

Aldebaran: The Catastrophe published by Cinebook was one of the very first reviews that I did on downthetubes some two years ago. It published the first two French albums of the Aldebaran segment of The Worlds Of Aldebaran series in English for the first time. Since then Cinebook have completed both the five album Aldebaran arc as well as the five album Betelgeuse arc and will begin to publish the third arc, Antares, beginning in October 2011. Written, illustrated and coloured by the Leo (Luiz Eduardo de Oliveira) these series are set on human colony worlds in the 22nd century and follow the experiences of the colonists as they come to terms with the other life forms that inhabit those planets. 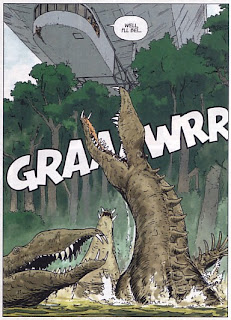 The story of Aldebaran is told through the eyes of teenage fisherman Mark Sorensen who, along with Kim Keller, the younger sister of a friend, is orphaned when his village is freakishly destroyed, a destruction the pair are lead to believe was caused by a dangerous and previously unknown sea creature. Helped and/or hindered by the journalist Gwen Lopes, biologist Driss Shediac, escaped prisoner Alexa Komarova and the scheming Mr Pad, Mark and Kim travel along the coast from their small outlying fishing village towards the planet's capital city Anatolia where they hope to find work and a new life. Instead they run foul of the authorities and end up imprisoned. The Catastrophe ends here after a long and fantastical journey for the two companions.

The Group begins three years later with Mark in prison and Kim older and rather more streetwise and less impetuous than her younger self. The story takes something of a twist here as we discover just how strict the planet's authorities are and just about every character that survived the previous book makes a reappearance as Mark escapes from prison and he and Kim go on the run, abetted by the now disillusioned journalist Gwen, as everyone tries to discover where and just who Alexa and Driss are and how they seem to know so much about the sea creature that destroyed Mark and Kim's village.

The Creature brings the saga of Aldebaran to a conclusion and the reader discovers much more about the creature as Mark and Kim's group vie with the authorities to understand the sea creature and discover the reason that Aldebaran has been cut off from Earth for a century.

Leo weaves a story that initially seems to be setting off in one direction but which takes a twist amost halfway through that raises the interest level considerably. What begins as a simple quest storyline for the truth about the sea creature also becomes a rebellion against the state. 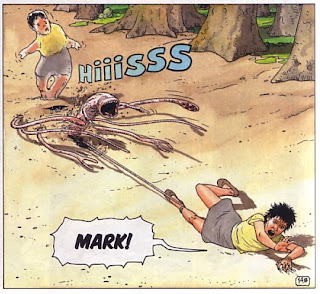 These are thoughtful books covering the themes of coexistence with nature, totalitarianism and, to a lesser extent, sexism. Indeed as Leo grew up under a military dictatorship in Brazil, a country with an enormous coastline as well as the huge Amazon river basin, and considerably more wilderness than civilisation, you can see where the ideas and themes of his Aldebaran story come from. Indeed the books often feature long sections of discussion between the characters as they argue out these themes amongst themselves.

Yet for all the slower talky sections it is all held together by Leo's remarkable alien flora and fauna. From the enormous but docile flying Caravelle to the dangerous but immobile Eleuter, from the beautiful Gregorias (below) to the startling Amedea, the creatures and the environments that they inhabit are truly remarkable and the reader is often left both fascinated and repulsed by them.

If you are after fast moving, shot-em-up SF then try Cinebook's Orbital since the Aldebaran books will not be for you. However for a thoughtful if, at times, perplexing and talky story set in a gloriously alien world then Aldebaran is both a planet and a series worth sticking with and exploring to the end. Just remember that with this series, determination pays dividends.

The Worlds Of Aldebaran books were originally published by Cinebook as two French albums per English book before being standardised to the current one album per book, with the first Betelgeuse album being published in the third Aldebaran book before the Cinebook series changed titles.

The following is a listing of which French albums appear in which English books.

• Buy the Worlds of Alderbaran books on amazon.co.uk

• There are more details of all the original albums (in French) on the official Worlds of Aldebaran website.
Posted by Jeremy Briggs at 7:00 am