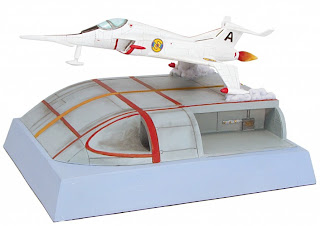 Despite Captain Scarlet being over 40 years old, Spectrum remains green.

Spectrum's Angel aircraft, as featured in Gerry Anderson's 1967 TV series Captain Scarlet and The Mysterons, remain popular enough to have two new merchandise releases before Christmas. Featuring in various British Captain Scarlet comic strips drawn by the likes of Ron Embleton in TV Century 21 or John Cooper in the News Of The World magazine, or even in The Angels strip in Lady Penelope drawn by Jon Davis, the Angel aircraft retain a sleek futuristic look even after all these years.

Robert Harrup Designs, who produce miniature figurines of various comic and TV themes including The Beano and Thunderbirds, have produced a diorama of an Angel aircraft launching from Cloudbase, Spectrum's hovering HQ. The Angel diorama is made of hand painted ceramic resin in a limited edition of 250 and costs £65 with free postage and packaging in the UK. 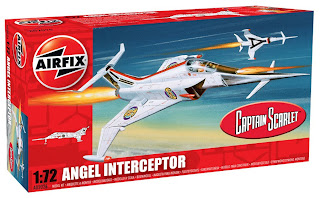 Many people refer to the Angel aircraft as Angel Interceptors because that is the name that Airfix gave to their plastic construction kit of the plane which was originally released as a Series 2 kit in 1968. The Angel Interceptor kit remained in Airfix's range for many years after the series left TV screens but eventually passed into history.

However, due to demand from the kit-building fraternity, Airfix have re-released the kit and it can only be a bonus for everyone that they are reusing the original box illustration painted by Eagle and Swift artist Roy Cross which, no doubt, did much to inspire several generations of children who had never seen or even heard of Captain Scarlet to buy the kit in the past. The kit is available now and costs £6.99.

To finish we have a special Friday treat from Anderson fan James Fielding who has combined the Japanese title sequences of various Gerry Anderson TV series and also added subtitles which translate the songs that were added to them for the Japanese market.

There are more details of the Angel launch diorama at the Robert Harrup website.

There is more information on the Angel Interceptor kit at the Airfix website.

John, I'm kinda grateful to you for pointing these out. BUT...if I buy, or get one I may have to do all the dusting in our house - due to the death by my wife's hand- of the previous two versions of the Airfix kit taking a plunge and not being Mysteronised.