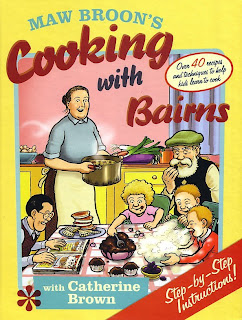 She has been cooking for bairns since 1936 (in fact the exact same bairns since 1936) so Mrs Brown should really know a thing or two about cooking with children. With the help of Scottish cookery writer Catherine Brown, no relation but known as Auntie Catherine all the same, and her official biographer, DC Thomson managing editor David Donaldson, Maw Broon is back with her third full length cookbook.

in time for Christmas 2007. This lead to a run of titles covering Burn's Night suppers, days out in Scotland and gardening tips as well as an apron and the one that tickled our fancy last Christmas, a wooden spoon. 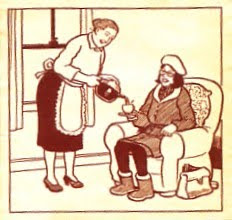 From a comics perspective, the Broons cookbooks have been lovingly compiled with lots of Broons artwork and story pages from the Sunday Post newspaper that the strip has been published in for all these years. They have been beautifully produced with the first book going as far as having virtually all the modern publishing information on a throwaway paper band that left the book itself as a supposed replica of Maw's own cook's notebook complete with hand written notes and recipes from the Sunday Post 'cut out and stuck in'. As such it worked just as well as a nostalgia book as it did as a Broons book or even as the cookbook that it was intended to be. 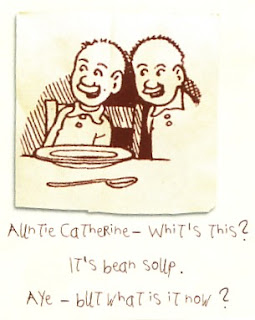 Maw Broon's Cooking With Bairns is different to its two predecessors in that it is actually aimed at children and so the nostalgia level of the book is cut back to allow for visual explanations of the cooking skills required as well as a lot of groan inducing cookery jokes. Not all of the artwork is gone however and there are pages of Dudley D Watkins Broons art reprinted in the book while current Broon's artist Peter Davidson provides the cover and two lovely related colour frontispieces. The recipes are simply explained and often Scottish oriented - how about Chicken Stovies followed by Cranachan for dessert and if the children eat that all up, a walnut tablet as a treat (tablet being Scottish sugary fudge rather than something medicinal)?


Maw Broon's Cooking With Bairns is published by Waverley Books on 1 April 2010 and, like all Waverley Broons books, is very keenly priced at £9.99 for an A4 size hardback. This is one Broons book that I would place with the gardening and holiday books as a tie-in rather than with the other two cookbooks which deserve to get added to a collector's Broons shelf but, that said, I would still expect to be buying some of them as presents for several mothers in the near future.
Posted by Jeremy Briggs at 7:00 am