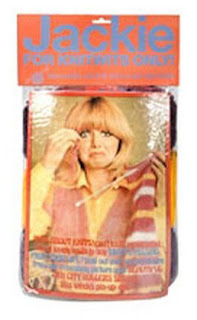 And the 2009 downthetubes award for the most bizarre British comics tie-in merchandise of the year goes to...

Firstly let's remember that our favourite piece of bizarre British comics tie-in merchandise to date has been the Jackie Knitting Set. DC Thomson have licenced a lot of different Jackie products over the last few years on the back of the success of the original Best Of Jackie hardback book published by Carlton/Prion in 2005. These have included mugs and key rings with the Jackie compilation music CDs being perhaps the most successful of the recent batch with the fourth album, Jackie The Annual 2010, being released last week. Despite these the Jackie Knitting Set still takes the biscuit and when we spoke to DCT editor Bill McLoughlin, who now works for the company's licencing department, about it he described it as "probably the most unusual and I'd be hard pushed to come up with something more quirky!"

In the meantime Ron Grosset and his team at Waverley Books have had a lot of success with their Broons tie-in books beginning with Maw Broon's Cookbook in 2007. These have always been lovingly compiled, beautifully produced and competitively priced. One reason for the competitive price is Waverley Books' deliberate policy that they are not sold for a big reduction in shops such as Bargain Books or as a loss leader in supermarkets.

Now that gets our award for the most bizarre British comics tie-in of the year.
Posted by Jeremy Briggs at 11:29 am