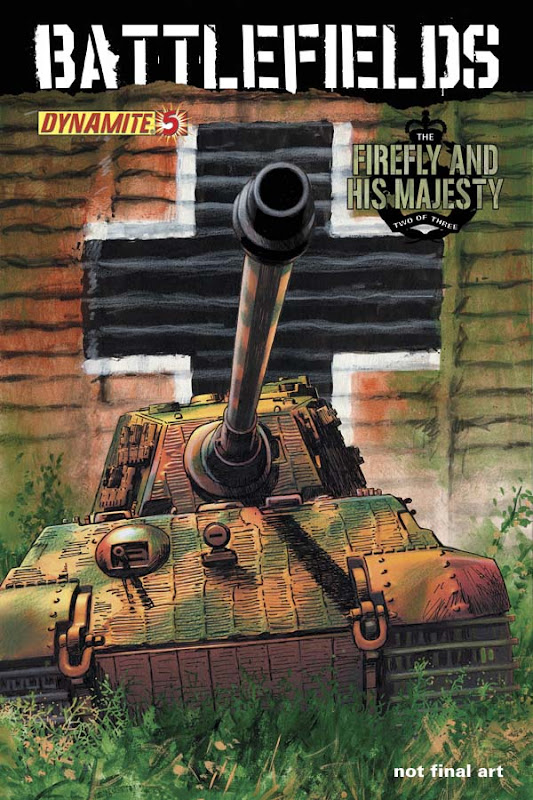 While we're primarily a British comics news site our remit does often cover the work being done by British comic creators beyond our shores - and one title that recently caught our attention, very belatedly, is Garth Ennis' Battlefields project for Dynamite Entertainment. (All right - make that incredibly belatedly, but the beauty of today's comics is that you can catch up with collections!)

Launched back in 2008 with "Night Witches" - the tale of female Russian fighter pilots inspired in part by Battle Picture Weekly's Johnny Red, in addition to the strips themselves, utilising top artists such as John Cassady, PJ Holden and, currently, Carlos Ezquerra, Garth has been plugging British war comics along the way. (He freely admits his love of the genre and is providing the introduction for the first Johnny Red collection from Titan Books, out later this year).

The latest series is a sequel to the critically acclaimed The Tankies storyline, set in 1945. Fan favourite character Sherman Stiles has been promoted from Corporal to Sergeant. With his Firefly, a British version of the Sherman Tank, and a high-velocity gun, Sherman is set to tear apart any German Tiger tanks in his own way – but this time, the Germans have an ace up their sleeve... the fearsome King Tiger tank!

“It’s early 1945 and the recently promoted Sergeant Stiles is now happily in command of a Firefly, a British adaptation of the American Sherman tank with a high-velocity gun – one that can even take out Stiles’ nemesis from last time, the German Tiger,” says Garth. “But as the Allied armies advance onto German soil, Hitler’s armies are getting ready to go down fighting, and Stiles soon finds himself locked in a one-on-one duel with the fearsome King Tiger tank. 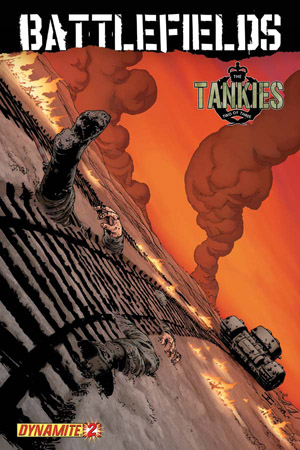 "This monster makes the ordinary Tiger look like a house cat, so it’s pretty much back to square one for our hero and his crew… which Stiles takes with his usual good humor and stoicism, of course. ... Anna Kharkova from The Night Witches and Corporal (now Sergeant) Stiles from The Tankies were both strong enough characters that I wanted to write new stories for them.”

With interiors by the talented Carlos Ezquerra and covers by veteran series cover artist Gary Leach, Battlefields is clearly firing on all cylinders, and critics have been enthusing about Ennis’ relaunch in the action-filled period of World War II. 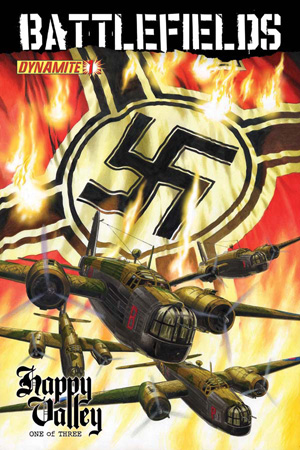 “Dynamite has a good series here with stories that Ennis truly seems passionate about," noted Doug Zawisa, Comic Book Resources about Battlefields: Happy Valley. "While it is hard to emotionally invest in these characters due to their lack of history, there is no denying these characters are human and can be related to or empathized with. For those looking for a war comic fix, you certainly cannot go wrong with Ennis’ series.”

“Battlefields: Happy Valley is the perfect example of how war comics should be done," agreed web site Hypergeek. "Actually, it’s not just an example of a perfect war comic, it’s an example of a perfect comic! Garth Ennis’ character driven script, accompanied by PJ Holden’s intense and powerful artwork, make for one of the best comics on the shelves. The second season of Battlefields is of to a fine start, and sets the bar incredibly high for the rest of the series.”

The latest issue of Battlefields is on sale in the UK in specialist comic shops. Dynamite collected the first Battlefields stories - Night Witches, Dear Billy, and Tankies - last year. The edition features some ever-so-slight tweaks the creators have meticulously restored, plus bonus art material including a complete cover gallery and a special look at the making of the stories.