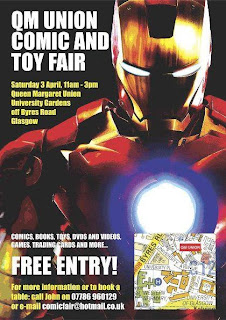 The latest of the half yearly Glasgow comic marts will be taking place this Saturday, 3 April 2010, in Hillhead. In a change from the mart's traditional home in recent years at Hillhead Library, Saturday's event has moved down the road to the Queen Margaret Union building in University Gardens where is has been re-christened the QM Union Comic And Toy Fair. The doors are open from 11am to 3pm and entrance is free.

In addition to the usual local dealers selling comics, graphic novels and other related merchandise, Glasgow's small press creators will be displaying their wares under the banner of Underground Overkill. These creators from the Scottish Cartoonists Ning group include Dave Alexander, John Alexander, Jim Devlin, Dave Gordon, Garry McLaughlin, Curt Sibling and Jim Stewart and between them they publish titles such as Gangaman, Khaki Shorts, My Excess, Nexion and Total Fear. 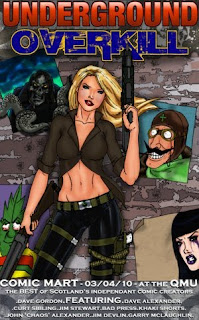 After testing the water at the last Glasgow comic mart where they were selling a selection of their own titles, the group has come together to create two compendium books that will be launched at this mart. These are the large anthology Underground Overkill which will retail at £9.99 and the pin-up collection Babes, Bullets and Blades which will be £7.99 and consists of illustrations of... well you can probably guess that one.