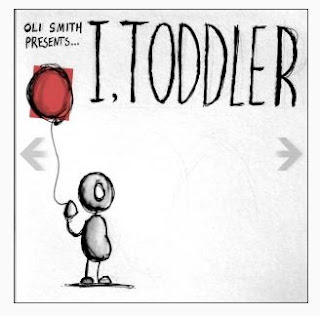 It's been a busy couple of weeks so our quick round ups of British comics news here have been a bit lacking. My apologies.

• The reason things have been scant here is down to the soft launch of weirdandbeard.com, the technology, scifi and other weirdness site I work for as a day job, part of Steam Industries (the name inspired by steampunk). We're still shaping the site and there comics may begin to be included... Expect some cross posting of reviews at the very least.

• Oli Smith got in touch ages ago to tell us his Grumpy Days has finished for the moment, but he's started an all new four pages per Wednesday comic called I, Toddler - "a fairytale about growing up and a bit of a departure in terms of style and content from me usual autobiography work." The first part can be viewed here http://theolismith.com/?p=536

• Steve Holland has his hands full with various projects, but he's not leaving loyal fans of his Bear Alley blog in the lurch. To make up for the lack of daily posts he's publishing, with full permission, Eagles on the Western Front from Look and Learn. The was a long-running First World War strip that appeared in the magazine between July 1971 and October 1973. "The artwork throughout was by the great Bill Lacey and I think you'll enjoy the way it unfolds as a story," says Steve.

• The Girly Comic Book Volume 1 is now available from Factor Fiction here for the very reasonable price of £15. The Girly Comic website has a lot of sampler strips for the book as well as some original Girly Comic webcomics. "I’d encourage any of you interested in picking up the book to visit and see what you think - I don’t think you’ll be disappointed, enthuses Richard Bruton in a review over on the Forbidden Planet International web site. "The sheer breadth of styles and topics means there’s just got to be something here for you. But The Girly Comic Book is far more than your usual comic anthology, so I’d imagine you, like me, will be flicking through the pages finding new, exciting and interesting strips from the start to the end of this very impressive collection."

• It looks like Jamie Smart's Count von Poo will will TOXIC's Crazy Comic poll, still ahead of strips featured in its recent strip giveaway, which has just gone off-sale. Jamie's strip is just ahead of Dave Hailwood and Paul Harrison-Davies Hoaxers, Werewilf and Lew Stringer's The Clump. Still, pleased to see that Bovver Baby by myself and Paul J. Palmer has claimed five per cent of the votes so far. Vote online at www.toxicmag.co.uk/vote

• To commemorate Charles Darwin’s bicentenary, cartoons for the sixth Shrewsbury Cartoon Festival (where Darwin was born) are on a science and nature theme. Bloghorn is running some of them on its site. We particularly liked Royston Robertson's entry (oi). Shrewsbury International Cartoon Festival 2009 is on 24th - 26th April. More info at: www.shrewsburycartoonfestival.com

• Talking of cartoons, Daniel Merlin Godbrey posits this intriguing insight into the life of cows, who apparently possess a secret fourth stomach to digest time...

• And finally for now... with animals in mind, we're pleased to report that comics creator 'Israeli has spotted Lucky the Half-Face Cat, which means it's officially the first day of spring in his neck of the woods. Half Face is something of a legend with the 2000AD contributor, a true cat survivor of many escapades.
Posted by John Freeman at 10:12 am