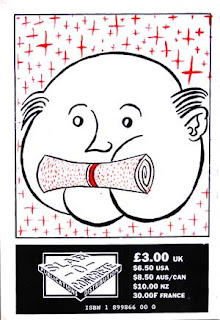 As well as the magazine and small press distribution service - a precursor to today's Smallzone, run by Shane Chebsey - Fast Fiction also had a regular stand at the legendary Westminster Comic Marts in the 1980s, selling the small press works of the likes of Warren Ellis, SMS, Glen Dakin, Phil Elliott, Rian Hughes and many other top talents. It helped launch their careers in comics and illustration.

Alex talks to Ed about his comic book work then and now, his processes of including work in the Fast Fiction anthology and the reasons it came to an end.

Pinsent has written and drawn his own small press comics since 1982, including characters such as Primitif, Henrietta and Windy Wilberforce. His work also appeared in Escape Magazine, Knockabout Comix, and Fox Comics in Australia. He took over Fast Fiction in 1987, the name taken from a Classics Illustrated knock-off spotted in the Overstreet Comic Book Price Guide. After Fast Fiction closed the mailing list was passed on to Luke Walsh and Mike Kidson, who used it to launch the small press comics review zine Zum!.

He also publishes The Sound Projector Music Magazine, devoted to reviews of experimental music, which launched in 1996.

This episode also features a competition to win a complete set of Dare Comics' The Hunter: tune in / download the podcast for more details!