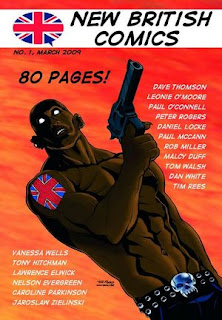 The book has been self-published in Poland in both a Polish and English edition by Karol Wisniewski, the contents and strips are the same in both editions but the only difference is language.

Karol kindly sent us a copy of both editions to review and I have to say that I really enjoyed reading the English edition. (Lancaster has a large Polish community, so we plan to donate that one to the Library here when it re-opens after some Lottery-funded refurbishment -- they have a good comic collection for lendng).

Back in the 1980s, there were numerous independent comic anthologies published in the UK, and the tradition continues with the likes of the brilliant Futurequake and Omnivistascope. But, I'd argue, none of these modern titles have the quirkiness that made long-gone titles like Escape, which was home to creators such as Eddie Campbell, Glen Dakin and Eddie Campbell so distinctly memorable.

Crammed with great strips and a web site to showcase more to back it up, New British Comics doesn't yet have the same voice as Escape - there's no feature material and neither do I expect there will be. But what it does have is a range of challenging, for the most part enjoyable material from a disparate range of comic talents.

I always say this, but an anthology title is never not going to throw up a strip or two that isn't too the reader's personal taste - that's what makes them such a hard sell. But the good outweighs the borderline here, from the opening shot of Brownehayes by Dave Thomson, a bizarre fable about a bizarre prophet; Dan White's illustrated tale, Jackie Goes to Hell, as a girl plunges, Dante-like, into Satan's domain to find her dead boyfriend's soul (the Howling Men are just superb...); and Daniel Locke's woodcut-styled ghost story, No Word of a Lie.

In short, if you can track down a copy of New British Comics then buy it. Give this ground-breaking project your support. The fact that this title has been co-published in Poland has helped raise awareness of all these comics talents and fly the flag for British comics on the continent - always something worth doing. Editor Karol Wisniewski has pulled off a remarkable coup in being one of the first independent 'small press' publishers to accomplish something akin to the sort of strip syndication that made giant publishers like IPC, DC Thomson and Egmont so successful. Perhaps others will now take his lead...

• New British Comics is now available through SmallZone's online shop - smallzone-shop.co.uk, and Karol tells us that other UK shops should soon be distributing the book, too.

• There's now a new web site about the project at: newbritishcomics.blogspot.com

• In addition to the book a Polish website dedicated to comics - www.komiks.nast.pl - has started publishing online British comics (click here for these)
Posted by John Freeman at 7:39 am

Do you know anywhere where I can buy a copy, or how I can get a London comic shop to order on in? The website doesn't seem to have any info that.

At present the book is only available in Poland and Glasgow - e-mail the editor, Karol - karolwisnia@gmail.com - for more info. When we last spoke he was trying to get the book into more UK shops.

We're working on UK distribution the now via Diamond and Smallzone.... It's a slow-ish process, but rest assure we'll let you know when it's out and about proper!