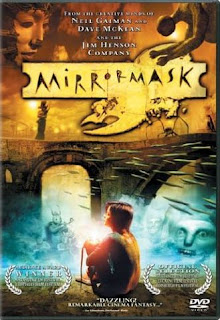 Dalmuir Library, Scotland is hosting a retrospective of artist Dave McKean's work until 30th May.

This free exhibition in the Library's Backdoor Gallery, part of the Booked! Festival which inclues appearances by SF writers Ian McLeod and Iain M. Banks, focuses on of framed works of original comic book art, book illustrations, photographs, and printed album covers is particularly aimed at a teenage and young adult audience -- although anyone with an interest in contemporary popular culture will find it exhilarating.

Dave McKean (www.davemckean.com) grew up with the exciting potential of New Comics - with the idea that for the artist the comic medium could be a means of creative expression and not merely an exercise in drawing graphic stereotypes.

McKean quickly emerged as an artist of rare innovative ideas, adapting mixed media and collage techniques to the compelling design of covers and layouts for comic books and Exhibitions the new graphic novels. Often working with Neil Gaiman, his reputation was spread through such works as Violent Cases, Arkham Asylum, Signal to Noise, Sandman, and Mr. Punch.

McKean embraced the new disciplines and possibilities of computer graphics from the 1980s onwards. He has already created many memorable pieces of work, which have assured him a place in the international history of 21st century graphic art.

In 2005 he made his directorial debut in film with Mirror Mask - a visually stunning fantasy story co-written with Gaiman, who in addition to comics projects, he has also worked with on the children's books The Day I Swapped My Dad for Two Goldfish and Wolves in the Wall. (The latter has been interpreted for theatre by the Improbable Company together with the National Theatre of Scotland).