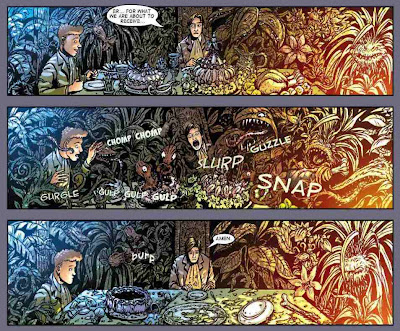 New episodes of Mirabilis, which ran in the dead-but-just-resting The DFC, have just been posted online: www.mirabilis-yearofwonders.com/Episodes.html

The creation of Dave Morris and Leo Hartas, Mirabilis was originally intended to appear in episodic form in Random House's weekly comic, before being collected for publication in book form. As the DFC has gone (although it may resurface next year), you'll now have to wait for the graphic novels – the first of which, Winter, is planned to be 160 pages long.

The creators will announce the release date for that as soon as they know it.

"We're hoping to get all the earlier episodes up online eventually, but for contractual reasons that isn't possible just yet," says Dave. You can read the first four episodes, and episode 1, “Stung!” in both English and French.

DFC readers who were left on tenterhooks with Estelle plummeting through the train window at the end of episode 10 (“Outside Looking In”) can now find out what happened. Those further two episodes, “Murders to Dissect” and “Standing on the Shoulders of Giants” may only be online for a limited time, however, so read them while you can!

Incidentally, of the many Flash readers for online comics I've used, the engine for Mirabilis is excellent, if a little requiring of instinctive clicking on first use. There's no clutter of uneccessary bells and whistles to help read the strip. Check it out.