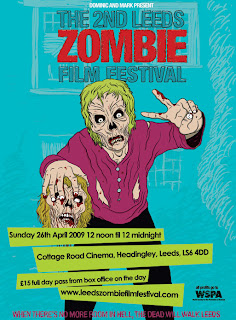 Sunday 26 April sees the second Leeds Zombie Film Festival. Held at the Cottage Road Cinema in the Headingly region of the city from 12 noon to 12 midnight, full day passes (available from the box office on the day or the ticket hotline - 0113 275 1606 ) will cost £15 with profits going to the World Society for the Protection of Animals. There will also be an aftershow party at the New Inn, opposite the cinema, from midnight. Food and drink are available from the pub all day.

The event is organised by two stars of the Emmerdale series - Dominic Brunt and Mark Charnock (Paddy and Marlon) - who are self-confessed zombie obsessives. The two will give a brief intro to each film shown and explain why it was chosen.
The current proposed line-up of films includes Plan 9 from Outer Space and Black Sheep.
• Check out the website at www.leedszombiefilmfestival.com for the latest list.
Posted by Ian Wheeler at 6:51 pm