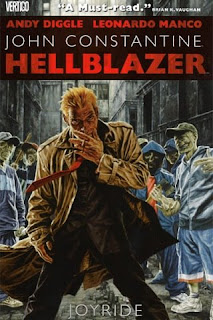 In October 2008, occasional downthetubes contributor Matthew Badham interviewed freelance writer Andy Diggle (who is also the ex-editor of 2000AD). An edited 2000 word version of that interview was published in the February edition of the Judge Dredd Megazine.

Now, with the kind permission of Andy and Megazine editor Matt Smith, the full, un-edited transcript of the interview has been posted at Citizen Badham, Matthew's blog.

In the interview, Andy talks about writing comics and video games, editing 2000AD and gives his thoughts on the future of comics and the British comics scene:

"Yeah, I've always enjoyed telling stories. I tend to think very visually, and I was always more drawn to script writing than prose. I remember when I was a kid, back before we had a VCR, I recorded The Empire Strikes Back on audio tape off the TV and then transcribed the asteroid field sequence in screenplay format. Just to get a feel for the medium, I guess.

"Weeding through the submission pile was always grim, but you made up for that when you found the occasional ruby in the dust. Guys like Jock and Frazer Irving were sending me unsolicited submissions; now we're not only working together, we're good mates. A lot of great talent came out of that slush pile: Mike Carey, Ben Oliver, Si Spurrier, Boo Cook, Rob Williams, Ian Edgington, Al Ewing...
"As for British comics, there seems to be quite a thriving small press scene at the moment. So much so that I've been seriously considering setting up a small comic con. Watch this space."

• Read the full interview at Matthew's blog here.
Posted by Matt Badham at 10:57 am