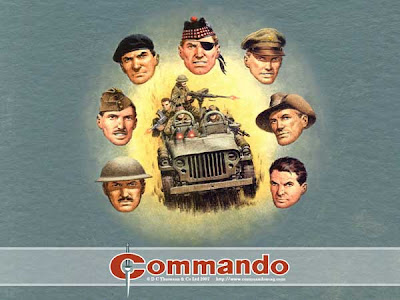 (With thanks to Jeremy Briggs): DC Thomson's official Commando web site has been updated again with another free to read strip and more giveaways to promote the popular digest title. Our sources at DC Thomson indicate the Commando web site is something of a "test bed" for the company's ongoing experimentation with web promotion for its titles, and we have to wonder if it's considering the rollout of similar sites promoting some of its archive – Starblazer, anybody?

The latest e-Commando story Buccaneer Bob RN is now complete on the site. Written by R.A. 'Monty' Montague and illustrated by DCT stalwart Gordon Livingstone, it was originally published as issue 618 in January 1972 and reprinted as issue 1740 in October 1983. Read it here

This is the fourth complete Commando story to go onto the site for free viewing. The others are Wall of Death, They Flew By Night and Last Laugh.

The Commando cover gallery has been updated again and now features issues 1 to 60 with credits for cover artist, interior artist and writer for each issue plus the often lurid back cover description - Terror reigned in German hearts whenever the high-pitched scream of power dives warned of the coming of the... Phantom Fighters!

Desktop wallpapers, based on the original art for the comic's covers, are now up to batch 20 which includes art from Ian Kennedy and Keith Page.

With the Commando office recently restarting the Ramsey's Raiders series, written by Ferg Handley, two of the four wallpapers this time are Raiders covers illustrated by Ian Kennedy including one what would make a perfect cover for a big Carlton reprint book of the Raiders series -- if Carlton ever realise that such a book would be a good idea.

That said, with six Commando reprint books behind them, including the latest Bandits at 12 O'Clock, the next Carlton Commando book is already scheduled for May 14 2009 and will be entitled D-Day Fight Or Die!.

D-Day 1944 was the largest amphibious invasion in history and is one of the world's most famous military actions. The stories, chosen by both ex-editor George Low and current editor Calum Laird, cover all the heroic action of 'The Longest Day', 6 June 1944. Including Ambush at Dawn, Normandy Drop and Blood of Heroes to Operation Bulldog and The Footsloggers, Commando: D-Day Fight or Die! features a dozen action-packed stories of the soldiers who stormed Hitler's formidable Atlantic Wall from air, land and sea-and won.

• The CommandoMag website can be found here
Posted by John Freeman at 7:43 am