How to Paint Rorschach 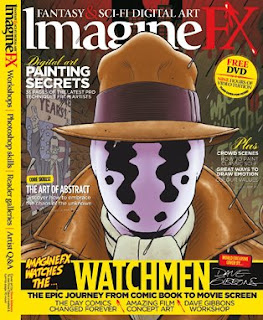 A bit late to the table with this one, but what with trips to London and the ramping up of the first of several new web sites during the day, I've been a bit sidetracked - apologies!

The April issue of ImagineFX – on sale now - boasts world-exclusive cover art from Watchmen artist Dave Gibbons, with an in depth workshop ‘How to Paint Rorschach’ and an accompanying video workshop from Dave on our free DVD.

There’s also an eight-page feature looking at the history and influence of the genre-defining comic, with comment from Vertigo Comics president Paul Levitz, Watchmen colourist John Higgins and one of the film’s concept artists Scott Lukowski.

The magazine's DVD also features over nine hours worth of video tuition, along with two fantastic comic creation software trials.

• IFX is on sale in WHSmith, Tesco, and all good newsagents. More info and subscription details at www.imaginefx.com
Posted by John Freeman at 5:17 pm