Daleks Series That Never Was 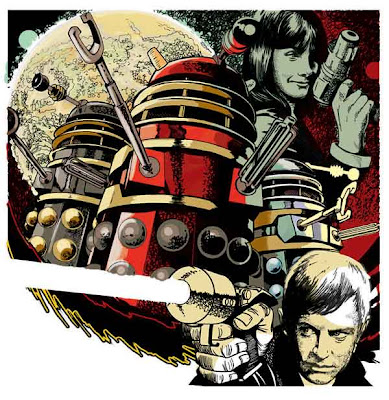 The latest issue of Panini UK's Doctor Who Magazine -- alongside its usual as ever excellent coverage of the ongoing TV series -- features some cracking illustrations by comics artist Brian Williamson that accompany a feature on a series spin-off that never made it to the screen: The Daleks.

Written by top TV archivist Andrew Pixley, Daleks' Invasion USA: 1967 AD details how Dalek creator Terry Nation tried to get a Daleks series off the ground at a time when Dalekmania gripped the nation. According to the article, which includes a detailed synopis of Nation's "pilot episode" for the series, set construction had even begun when negotiations between Nation and the BBC broke down, largely over costs.

Meticulously researched, Pixley delivers one of the most intriguing freatures on the history of Doctor Who in many a year... we just hope that given the Magazine's cover date, it's not an April Fool*.

Brian will be well known to some downthetubes readers for his work on the Torchwood strip for Torchwood Magazine, and for his past Doctor Who and Marvel UK work. Lured away from comics by the regular paycheck of the games industry he's now freelance once more, working as an illustrator for newspapers, books and advertising.

Despite their popularity, the Daleks have had an ill-fated history outside the Doctor Who show when it comes to spin-offs. In the 1990s Keith Barnfather of Reeltime Pictures, Nicholas Briggs, Kevin Davies and John Freeman attempted to get an animated Daleks series off the ground and began discussion with Nation, but the plans got no further than initial outlines and conversations with Nation himself during a US convention in Chicago.

• Doctor Who Magzine Issue 406 which also includes an interview with David Tennant, a new comic strip written by Dan McDaid with art by Sean Longcroft and a tribute to the late Dalek operator John Scott Martin is on sale in all good UK newsagents and available in US comic shops.

Email ThisBlogThis!Share to TwitterShare to FacebookShare to Pinterest
Labels: Daleks, Doctor Who Magazine