Newspaper Cull in Manchester: Fighting Back 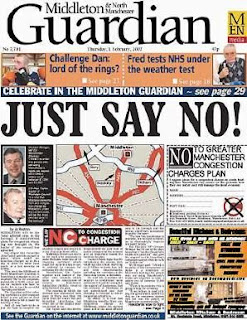 All right, this isn't quite comics, but it's definitely not good news if you're a comics creator who's ever used your local papers to promote events or projects like I have (our Morecambe Visitor kindly ran a two-page spread on Ex Astris when it started running in Spaceship Away).

Local newspapers, while rarely featuring comic strips themselves, are at least very good at giving a local voice to creators. Some, like the Birmingham Mail, even have a regular comics column, Speech Balloon, written by Paul Birch.

But many are in crisis: almost 60 have closed in the past 18 months, the victims of credit crunch and competition from online news and more particularly the huge decline in classified ad sales. Jobs are being slashed and behind the scenes departments (subbing, photography) merged as the large newspaper groups that have gobbled up all these newspapers seek to make savings.

Annoyingly for most of the local newspapers in question, if they were still locally owned some would be profitable and able to maintain staffing levels. As part of much wider groups their individual worth is just not being valued, especially by bean counters in the accounts departments of big companies such as Newsquest and Johnston Press.

Now, management at the Manchester Evening News group, which is owned by the Guardian, want to make nearly 80 journalists redundant - roughly a third of its editorial staff - and close all the offices of its Greater Manchester weekly newspapers, thereby depriving Manchester's population of its local voice.

These are savage cuts - the biggest of their type in the country - and an assault on local democracy that campaigners argue will tear apart the fabric of Manchester's community news.

There's now an online petition calling for the cuts plans to be dropped: http://www.ipetitions.com/petition/stopthemanchestercuts/ and a Facebook Group marshalling opposition to the cull.

The newspapers affected are:

The plans would mean all weekly papers in the MEN group, from as far north as Accrington to as far south as Wilmslow, would be based at its Deansgate office in central Manchester. Journalists would be expected to cover their areas from Manchester and there would be nowhere for local people to drop into in their local area.

Inevitably this will mean that the quality of Manchester's local papers will suffer; journalists will no longer be able to get a grasp on local issues and will rarely, if ever, be able to cover council meetings or court cases - a role which is an intrinsic part of local democracy.

This is devastating not only for the staff involved, but for Greater Manchester as a whole, and is being fought tooth and nail by the staff affected, local Chambers of Commerce, councils and more.

If this kind of cull happens in Manchester, it will be a green light for other companies to follow suit.

Incredibly, the cuts are being done in the name of the Scott Trust, which was set up to safeguard the Guardian's liberal principles in perpetuity. Strangling Manchester's newspapers and so suffocating the region's democracy is not the way to go about preserving those principles.

Thanks for highlighting this, John. The knock-on effect to all levels of local participation, from school plays to non-league football, could be extremely damaging.