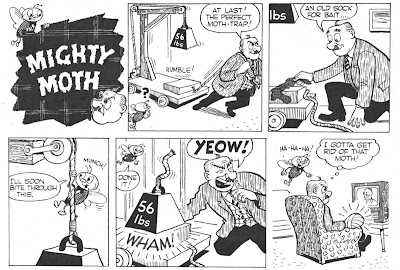 (with thanks to "Ian"): The first appearance of Mighty Moth, the longest-running strip in Britain's TV Comic was in Issue 384, dated week ending 14th March 1959.

The strip ran every week until the title was cancelled in June 1984 and was the creation of Dick Millington, whose more recent credits include The Guinness Book of Records for the Mail on Sunday for 10 years and who still writes and draws the I Don't Believe It strip in the Daily Mail

Technically, of course, TV Comic Issue 384 would have been on on sale since the previous Monday (9th March), but for a strip that simply featured man versus moth every issue for some reason it stuck in my brain and was often great fun, as was Dick's other TV Comic work such as Basil Brush and The Moonbeams. He also wrote several strips including The Telegoons and edited TV Comic's stable mate title Pippin and drew Happy Famillies for Whizzer and Chips and Ray Presto for Krazy.

Mighty Moth also stuck in the mind of Alan Moore, apparently making a cameo in The Black Dossier (on Page 190).

"I wrote the stories and drew the entertainment for 16 years in the Sixties and Seventies, along with Basil Brush," Millington, who lives in Canterbury, confirmed in the Daily Mail in 2002 when asked if he was the Moth's creator by a reader. "My career in humour began in early youth when I was stooge to my dad, a semi-professional comedian ('don't give up the day job') whose stage name was Billy Jiggs.

"We were children's entertainers by day and on the working mens club circuit in London and Essex - an experience that has subdued better men than me.

"Unable to overcome stage-fright, I decided to retire from showbusiness and become a cartoonist - where, in a high- circulation newspapers like the Daily Mail one can reach a huge audience without them shouting back!"

Here at downthetubes we echo other fans who say "Here's to 50 more years swatting", but like many other great comics and strips, it's not to be.

The Mirror's parent Trinity Mirror of course owns the rights to Mighty Moth and other non-licensed strips that featured in TV Comic.

I think a reason for Mighty Moth being so well remembered could be that it was one of the few strips in TV Comic that wasn't based on an existing television show. I can remember finding that slightly perplexing as a kid.

Thanks. I couldn't remember the name of this comic strip, but the man reminds me so much of Sir David Jason now.