• Former Star Trek actor Wil Wheaton, now an ardent campaigner for internet rights and longtime blogger has a new short collection of his favorite pieces from his books and blog called Sunken Treasures, including a production diary from his 2008 role in Criminal Minds. We mention it here -- quite apart from the fact that it's sure to be an enjoyable read -- because the cover design is by 2000AD creative D’Israeli. Two editions are avalable: a US Edition and a World Edition both from lulu.com.

• Talking of D'Israeli, the consummate colourist holds his hand up to past mistakes in an honest post on his blog, revealing where his career as a 2000AD colourist jumped the shark. "One of the drawbacks of being a commercial artist is that your mistakes are as public as your triumphs," he notes, on discovering that this month's Judge Dredd: The Megazine is accompanied by a reprint volume of Pussyfoot Five. Read the tale here 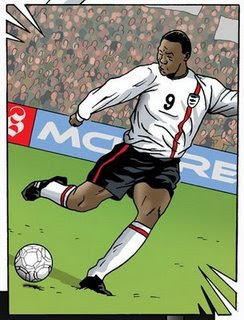 • The latest issue of The DFC contains FRONTIER Part Six: 'The Greedy Ground' with art by Andrew Wildman, script by Jason Cobley. Weird goings on down in the mines as Mitch meets the eveil Mr Winchester and Daisy meets the amazing 'Mother'. Who is 'Mother'? Well you will just have to get hold of your copy.

• More news from Jim Boswell: he's drawing a football strip for KiCK! magazine, which is aimed at 6 to 12 year olds. "It's been a lot of work, but surprisingly fun, too," he says. "The editor has been fantastic, sending through a tonne of good ref photos and links to youtube clips of the actual match I've been drawing. These have been invaluable, as they're very keen to get the players' likenesses spot-on."

• In the run up to Christmas, author Iain Rankin was doing the rounds plugging his new book, Doors Open. During the interviews he always mentioned his John Constantine graphic novel featuring the Hellblazer anti hero published by Vertigo, even saying he had finished it. Well, it seems something has changed because when Vertigo's line of crime-driven comics and graphic novels was discussed at last week's New York Comic Con, Constantine did not feature in the Rankin-penned Dark Entries, illustrated by Werther Dell’Edera. Comic Book Resources reports that Rankin, a longtime comics fan, did initially pitch a Hellblazer story, according to the line's editor, Will Dennis, it was more a detective story that fitted well into their ideas for the crime line that centres on a private detective hired as a mole on a reality TV show called Haunted Mansion. Something of a locked room mystery, things outside the producers’ control start to affect the contestants. Dennis said that the book has supernatural elements and though it’s not a Hellblazer story, Constantine fans should enjoy it.

• Sean Azzopardi has just published an interview with critically acclaimed artist Oli Smith, the London based self publisher whose work include titles such as Hazy Thursday, Summer Ball and Weekend friends. He has also written for Doctor Who and illustrates and paints the odd canvas. (Check out Oli's own web site here). Sean, no slouch himself when it comes to cretivity, reports he has just found out that a four page strip he submitted has been accepted for Side B, a music anthology.

• This "Tube Surf" complied with help from Matthew Badham and Reuben Willmott
Posted by John Freeman at 4:09 pm