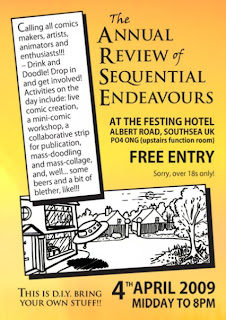 (with thanks to Darren Morrow): News reaches us of an over 18s only comics event in Southsea in April. Taking place at the Festing Hotel on Albert Road, The Annual Review of Sequential Endeavours (Facebook Link) invites all comics makers. artists, animators and enthusiasts to enjoy a day of workshops, live comic creation, mass collage and, of course, some beers and "a bit of blether".

The first minicon event organised by Portsmouth Independent comic creators and enthusiasts, creatives already involved include No Refund Comics and other local comics creators, but it's already attracting the interest of artists and writers from further afield.

"The aim is to provide a varied selection of small press for free, swap or to sell," say the organisers. "Producers and artists are encouraged to bring their work." Animation creators are also very welcome.

The event kicks off at mid-day on Saturday 4th April until 8.00pm.

• Festing Hotel: Location (via Google Maps)
Posted by John Freeman at 10:47 am

Clown Press will be present upon this glorious Spring day ;))