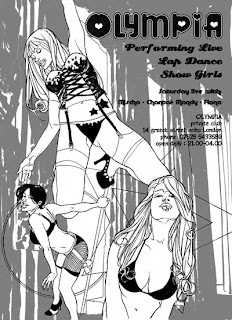 Coincidentally, Milligan, whose past work includes 2000AD's Bad Company and Shade: The Changing Man and is currently wirting Hellblazer for Vertigo, has just been interviewed on Standard Attrition, the group blog for Vertigo creators.

There, he enthuses about his other new Vertogo title, Greek Street -- a creator-owned title which Vertigo has been developing for six-to-eight months with Milligan and David Felice, which Milligan describes as an "edgy, violent, very sexy re-imagining of some of the classic tales of ancient Greek drama seen through the prism of a tough modern-day London."

Featured here is a promotional image for the book which Felice drew for the New York Comic Con but was not used during the Vertigo panel where the series was announced.

Milligan also talks his approach to writing comics in the short interview and, in passing, about the controversy caused by his Marvel project, Xstatix, remarikng "...I was disappointed with the people higher in the food chain when the uproar about the Princess Diana story broke, and we had to f*** around with it. I thought, you Americans had a revolution so you didn’t have to worry about what our insane and largely inbred bunch of Royals thought..."

• Read the interview by G. Willow Wilson
• The first issue of Vertigo's Greek Street will be oversized and cost just one dollar. Davide Gianfelice (please note, this blog is in Italian and features adult images), whose credits include Northlanders, will draw the series. "It's fantastic art," Milligan said during a panel at the New York Comic Con