Hi-Ex in the Highlands This Weekend 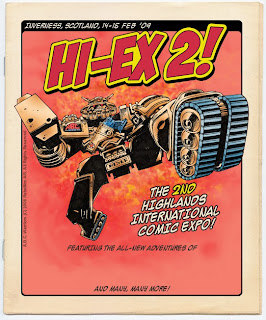 Hi-Ex 2, currently Scotland's only comics festival, will be "bigger and better" this weekend when it opens in Eden Court, Inverness, tomorrow.

Organisers Richmond Clements and Vicky Stonebridge are determined to make Hi-Ex and annual event, even though bad weather and heavy snow forced some of the event's star guests to call off their planned appearances last year, the response from the public easily justified the return of the festival for 2009.

"Even with the bad weather, we were surprised by the number of people through the door," Clements told the Inverness Courier this week.

While pressure of work and other factors have forced some comic creators who intended to come to the Eden Court event to cancel their appearances, there are still some top guests to entice fans to the Highlands event, including appearances by Strontium Dog writer Alan Grant and artist Frank Quitely.

There will also be a major charity auction which includes signed art from Charlie Adlard and Simon Coleby, workshops and more.

While there have been some guest cancellations, almost a dozen artists and writers who cannot make this year's event have pledged to come to Hi-Ex 2010 if possible.

"We don't want it to get too big," Clements told the Courier, which features a full schedule for the event.

"It's a family event and we want to keep it that way. A lot of big festivals can become a bit impersonal."

The details of the items in the Hi-Ex charity auction are available here.
More details of the convention and its guests are on the Hi-Ex website.
The downthetubes reviews of Hi-Ex 2008 are here and here.
Posted by John Freeman at 3:24 pm