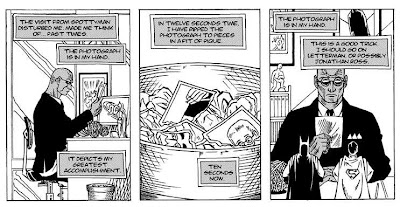 Out in early March, Lying in the Gutters' Rich Johnston's Watchmensch, a parody of a certain major DC Comics-published comic series, soon to be a major movie (at least that's what a lot of film people and DC Comics are hoping) is a deliciously wicked attack on the US comics industry and its long-held attitudes to creators' rights.

In Watchmensch, after one of them is murdered, a team of lawyers who have had dealings with the comics industry must band together again against a conspiracy. But who is trying to kill Nite Nurse, Spottyman, Silk, 1700 Broadway Manhattan and Ozzyosbourne? And what is the cloned creature about to be dropped on New York City?

With a barbed script dripping with the kind of knowledgeable in-jokes you'd expect from the man who writes the comic industry's longest-running gossip column, with splendid Dave Gibbons-parodying art from Simon Rohrmuller, Watchmensch offers a savage take on US comics, laced with a decent amount slice of humour and visual gags.

Alongside the story, however, Watchmensch holds up a mirror to the chequerd history of US comics publishing when it comes to creators' rights and what's refelcted isn't very pretty. While things have slowly changed down the years, there's still a long way to go before many comic artists, writers and other contributors to a successful comic can honestly say they have secured a good deal for their work, in comparison with book authors and other creatives.

Accompaying the comic is a short essay on the history of Alan Moore's experience of working with both DC Comics and creator rights in general which makes for some sobering reading. Try and track down a copy if you can. 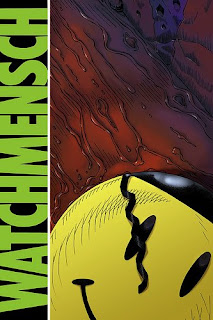 • Watchmensch will be available in comic shops everywhere in March 2009. Visit the Brain Scan Studios website for more information. For sample pages, a list of stockists and other info, visit the book's official web site: www.watchmensch.com