Fly Me to the Moon, Forties Style 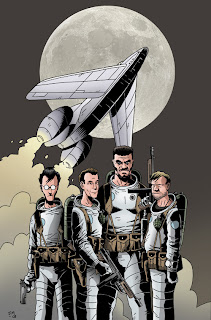 Manchester-based comics artist Jim Boswell, whose credits include Markosia's Starship Troopers and more, has begun posting some of his designs and pages for Project: Luna 1947, his latest project for the company.

Written by Martin Hayes, who Jim worked with recently on the "Intergalactic Bank-Robbing Aliens" story for Futurequake, Project Luna: 1947 is an 88-page graphic novel that looks like it's going to be great retro-fun, mixing 1940s post war austerity with spaceships, spacesuits and adventure.

"I won't give away too much of the plot," says Jim, "I'll just say it will be awesome! Martin is a fantastic writer and we're going to have a blast doing this."

Jim plans to post more teaser panels and pages on his blog as the project develops.

"Jim’s a great artist and I’m really looking forward to seeing his pages as they come in," said Martin of the project late last year, who is still busy contributing to the Futurequake project. He's recently written a five-page story called Bad Static for an upcoming issue of indie publiser's horror anthology Something Wicked, which is being drawn by John Cahill.
Posted by John Freeman at 10:26 am