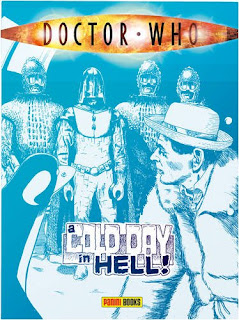 Panini, the publishers of Doctor Who Magazine, will release the first volume of the Seventh Doctor's collected adventures in May, compiling eleven stories under the umbrella title A Cold Day in Hell, the comic strip adventure written by Simon Furman, with art by John Ridgway, that pitted the Time Lord and diminutive shape-changing companion Frobisher against the Ice Warriors.

Digitally re-mastered and collected for the first time, also featured are the Doctor's encounter with the original Death's Head in Crossroads to Time, the robot bounty hunter lifted from Transformers universe and sent on his way to his new home in the early Marvel US-styled title, Dragon's Claws.

The full list of strips featured -- every Seventh Doctor strip from Doctor Who Magazine Issues 130-150 inclusive is as follows: 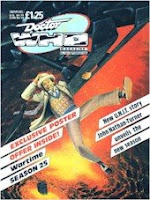 • Keepsake by Simon Furman, art by John Higgins
First published in Issue 140, John Higgins also delivered a stunning painted cover for the Magazine, with Sylvester McCoy helping out in its final look by posing on scaffolding during recording for The Greatest Show in the Galaxy at Elstree to nail the final version
• Planet of the Dead by John Freeman, art by Lee Sullivan
Every Doctor from the classic series features in this special story -- or do they?
• Echoes of the Mogor! by Dan Abnett, art by John Ridgway
First appearance of Dan's Foreign Hazard Duty, a futuristic version of UNIT
• Time and Tide by Richard Alan (Richard Starkings) and John Carnell ; art by Dougie Braithwaite & Dave Elliott
• Follow that TARDIS! by John Carnell, art by Andy Lanning, Kev Hopgood, Dougie Braithwaite and Dave Elliott
The Sleeze Brothers and the Time Meddling Monk feature in this zany 'jam' strip featuring a plethora of Marvel UK talent
• Invaders from Gantac! by Alan Grant, pencils by Martin Griffiths, inks by Cam Smith

All the early Seventh Doctor strips were edited by Richard Starkings, now better known, perhaps, as First Tiger of Comicraft and as the creator of Elephantmen, who gathered a wide range of upcoming and established British comics talent to work on the Doctor Who strip at the time.

Panini told downthetubes a second volume of Seventh Doctor is planned, but is unlikely to be scheduled for this year. If (and when) it’s published, it’s intended that the stories will continue to be released in order (starting with Nemesis of the Daleks featuring Abslom Daak, Dalek Killer).

A third volume, featuring strips from the Storybooks, Hulk Comic and later issues of DWM may follow.

Any news on whether a future collection would include the Hulk Comic strips?

As noted in the story, the Hulk Comics strips may feature in a third collection. Obviously, any further collections will depend on the sales of this volume.