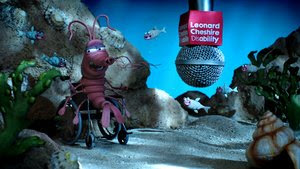 Leonard Cheshire Disability and Aardman Animations are offering one lucky winner two tickets to preview the new Wallace and Gromit film, A Matter of Loaf and Death, at the Aardman studios in Bristol on 22 December.

The competition is part of the charity’s Creature Discomforts campaign to change attitudes to disability and marks the launch of the fourth and final online game - called Fishing Fiasco and features Sonny the Shrimp. Play it today at www.CreatureDiscomforts.org/games.

To be in with a chance to win, all you have to do is log on and play any of the four interactive games, which are proving very popular with more than 100,000 people playing so far.

The top five high scorers for each game will receive a signed and framed print of the Creature Discomforts character from that game and will be entered into a prize draw to win this fantastic opportunity to preview the 30 minute film. The lucky winners will also have a tour of the Aardman studios and take part in an animation workshop.

The Creature Discomforts campaign, which features Aardman’s hallmark plasticine animations and characters based on the unscripted voices of disabled people, challenges people to change the way they see disability.

The Creature Discomforts campaign also features seven other characters including a stick insect who uses a walking stick, a shrimp who uses a wheelchair, a tortoise who uses crutches and a hearing impaired Cheshire cat.

The campaign is already making an impact with more than a third of people admitting that they have more to learn about disability and one in ten saying that they now know that they need to behave differently to disabled people.

A Matter of Loaf and Death is a mock murder mystery, with Wallace and Gromit starting a new bakery business called "Top Bun". Gromit learns that bakers have been mysteriously disappearing, and tries to solve the case before Wallace ends up a victim himself.
Posted by John Freeman at 6:53 pm