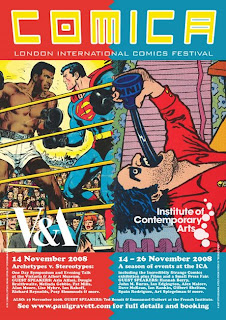 • As if you really needed reminding, the Thought Bubble Leeds Comic Festival takes place this weekend. Er, in Leeds... Comica 2008 in London runs from the 14th - 30th November 2008. More details on both the ICA and Paul Gravett's web site.
• Rebellion's digital comics arm Clickwheel has announced that it is publishing the vampires-versus-commandos comic series Sword of Dracula for iPhone. The military horror series, called “creepy cool” by Entertainment Weekly and “the coolest interpretation of Dracula in years” by Cinescape, is available in seven individual chapters or as a collected graphic novel.
Sword of Dracula tells the story of Veronica “Ronnie” Van Helsing, a commando who leads a vast spy organization against Dracula, here seen as a powerful, globe-trotting terrorist who controls blood in order to create weapons and materials.
A followup mini-series, Sword of Dracula: The Dracula War, from publisher Digital Webbing, will be released beginning in December on both the iPhone and retail racks.
Clickwheel is home to hundreds of comics including the UK’s premiere comic publication, 2000AD.

• Meanwhile, new digital comics publisher iVerse Media has announced its first wave of titles are now available in the iTunes App Store. The company has titles from Ardden Entertainment, Antarctic Press, Bluewater Productions, and Image Comics Creators with more books from other publishers on their way. Sign up for our iVerse Updates to keep up with the latest digital comics offerings from the company.
Launch titles include: Proof, ShadowHawk, Flash Gordon, Oz: The Manga, Wrath of the Titans, and Gold Digger: Peebo Tales. For a full list of our titles plus covers and solicitation info take a look at www.iversecomics.com/titles
Posted by John Freeman at 9:54 am