In Review: Charley's War Volume 5 - Return to the Front 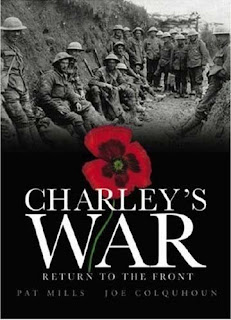 In the week of Armistice 90, the arrival of the latest collection of Pat Mills and Joe Colquhoun's brilliant First World War series Charley's War, first published in Battle Picture Weekly in 1981, seems more than apt.

Return to the Front finds World War One soldier Charley Bourne returning to the western front after home leave - an aspect of the war Mills notes he would like to have written more about in his notes on the stories. Reunited with old comrades Weeper and Old Bill - and, unfortunately, enemies like the bully, Grogan and the vile Lieutenant Snell - it's not long before he's back in the thick of the sickening devastation of the Western Front.

He and his friends are soon at the mercy of both inept leadership and enemy bullets alike, as Mills and Colquhoun once again deliver a powerful anti war drama that was, incredibly, first published in a war comic.

Colquhoun's art throughout is a delight, his use of contemporary photographs and other source material to portray the horror (and the occasional humour) of the trenches truly remarkable. While some of the reproduction of some pages -- particularly a few of the covers -- is in places a little disappointing, overall the work done to repackage this excellent story is a real treat. Of particular note are the supporting features, including Jane Colquhoun's memories of her father, Mill's notes on the story and Steve White's well-researched essay on the life in the trenches.

Mills script, written for a weekly title, sometimes sits uneasily in a longform collection, but has lost none of its bite for that: even a forced march down the Menin Road toward Hellfire Corner becomes a genuinely harrowing episode in the story, as Snell ignores the complaints and suffering of his thirsty men while revelling in the pomp and circumstance of warfare only he is able to enjoy, leading them confortably on the back of a horse.

While freely admitting to embellishing and inventing some aspects of the story, much of the tale is inspired from Mills' meticulous research of the war years, much in evidence throughout. The cricket match played as the Germans attack is a particularly savage observation of class.

There's been a lot of talk in this Armistice Week that younger people don't understand the meaning of the occasion: the BBC even took two teenagers to France to show them their great grandfather's grave, a both sobering and illuminating experience for the pair. To me, though, making Charley's War required reading in all British schools would be another way to keep the memories and the experiences of the First World War soldiers alive in many minds.

Charley's War is another excellent collection series from Titan Books and deserves as wide a readership as possible.

from amazon.co.uk
• Buy Charley's War: Return to the Front

• Pat Mills also praises the work of British artist Steven Beeny in his notes for this book, for his graphic novel Rebellion 1920, a fictional work based on the history of British Royal Air Force during its control of early Iraq in the 1920s.

The story focuses on the experiences of a young airman who has been posted to Iraq, as he comes to terms with the complications and morality surrounding the British occupation. Eleswhere Mills describes Rebellion 1920 as "The only genuine successor to Charley's War and what that series stood for that I am aware of... It's an awesomely researched story, enthrallingly written which totally held my attention. Steven Beeny shows remarkable courage in telling this story. It dramatises in fair, balanced and non-political way our shameful imperial past and and is tragically relevant to today.

"There are readers of Persepolis, Maus and Joe Sacco's work who will be interested in stories about Britain, too. This is the only one I know of that is out there." For more information visit Steve's web site at www.nazcastudios.com. The first chapter is available digitally and in print from lulu.com