In Review: The Leather Nun and Other Incredibly Strange Comics 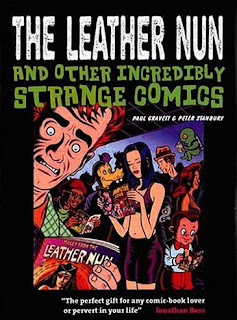 It's not just leather nuns that provide the strange fare that makes up this fun title from Paul Gravett & Peter Stanbury (released as Holy Sh*t! by St. Martins Press in the US): for just under ten quid you can also find out about comics featuring lesbian unicorns, cavemen fighting giant tabby cats, a peasant girl fervently worships the swastika and killer roosters.

When the publishers say Gravett and Stanbury have scoured the world to bring together a non-PC carnival of comic-book curiosities, they're not kidding. Who else would reveal the origins of Russia's busty bombshell Octobriana, a comics myth later given greater life by the likes of Bryan Talbot and others? What other book for the Christmas market is going to offer you flesh-eating farm animals in The Barn of Fear, Fatman the Human Flying Saucer, Binky Brown meets the Holy Virgin Mary, Chaplains at War or Amputee Love?

Then there's other delights such as Nembo Kid, a re-working of Superman for the Italian market, his name changed in 1954, perhaps to avoid criticism that the publishers were advocating the failed philosophy of the ubermensch so close to the end of World War Two. It's nuggets like this that make Leather Nun such a fun read.

While not presenting the full comics -- that would probably be too much for some sensibilities and anyway, many of them are probably not as good as the titles or synopses, presented as 61 glorious double page spreads of covers and background articles -- this is a smashing title for both comics connisseur and casual comics fan alike, the text both intelligent and irreverent.

Of course, there is the danger that a book such as this will merely confirm many prejudices non-comics fans have about those who do enjoy the medium, but I'd say it's well worth the risk. Gravett and Stanbury have again come up with the goods without being in any way po-faced about the comics they regularly champion.

• There's a free exhibition of Incredibly Strange Comics at the ICA as part of ComICA from 14 until 26 November. More information here