(with thanks to Matthew Badham): Comics artist Rufus Dayglo (whose credits include 2000AD, the new Tank Girl comics from IDW) is taking part in the Mutoid Waste Exhibition in London from 21st November.

"I've been asked by the good people at Mutoid Waste Company to take part in an art show," Rufus announced via his blog, "painting a piece of old aeroplane like a bomber pinup!

"I'm so excited! A lifetime of building Airfix kits finally pays off!"

He quickly followed up the news with his Tank Girl sketch for the exhibit (below).

(Ex of) 2000AD and Skreemer artist Brett Ewins is also involved in the event.

Using all types of industrial scrap as their raw materials, the Mutoid Waste Company is a mobile group of artists who have created a new generation of sculptural/musical performance, a unique blend of mechanical circus, theatre, art and music.

With an extensive collection of bizzare show and transport vehicles and a staggering range of cyber-tech props and costumes, they guarantee to shock and surprise...

The Company was started in 1984 in London by Joe Rush and Robin Cook, who, inspired by the imagery of 2000AD and Mad Max, specialised in organising illegal parties in London throughout the 1980s, driven at first by eclectic assortments of fringe music such as psychedelic rock and dub reggae, but then embracing the acid house music movement. Their use of discarded scrap metal and plastic to create unusual, mutated sculptures quickly attracted a small group of like-minded individuals who each added their own particular talents to the common creative force.

Very rapidly developing into an underground sub-culture, they would find unused, abandoned warehouses, which were then lived in and decorated over a period of weeks (sometimes months) and finally transformed into incredible party venues, plastered with their sculptural and mechanical creations. Bands and DJ's were called in, lights and PA systems set up, and the party would begin... 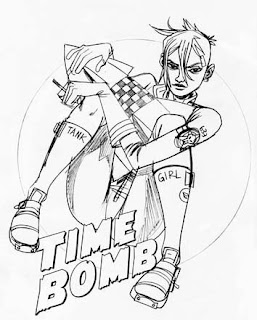 They performed at Glastonbury, building a car-henge and drumming in the solstice, and at many other locations throughout Britain, until the forces that be and the attitude of the Tory government forced them to leave the UK in search of a more appreciative society. Within a short time the group had prepared themselves for a mass exodus to mainland Europe and are now based in Italy.

"The sculptures at these parties were generally made from old bus, car and bike parts, the most famous being 'The Skull Bus'," notes photographer Alan Lodge, who has documented their work, "A giant vehicle made from an old bus, which was completely stripped down and reconstructed into something that looked like a shark's skeleton with a mutant human skull for a head.

"They're probably best known for a giant skeleton puppet (15-20 feet high) made from chrome exhaust pipes and stuff. "It had wires tied to the arms, legs and head which went down to the puppeteirs' who would then dance to the music. Watching this monster doing giant raving gestures in time with the music, etched in folks' minds forever."

• More information about the Mutate Britain Exhibition on MySpace

• More about the Mutoid Waste Company on the Continental Drifts web site
Posted by John Freeman at 7:42 am